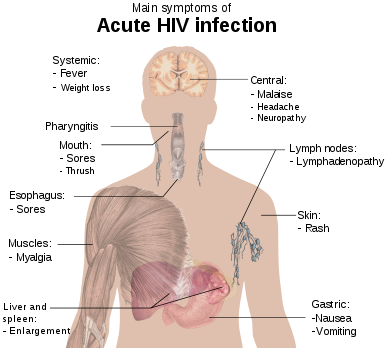 A symptom (from Greek σύμπτωμα, "accident, misfortune, that which befalls",[1] from συμπίπτω, "I befall", from συν- "together, with" and πίπτω, "I fall") is a departure from normal function or feeling which is apparent to a patient, reflecting the presence of an unusual state, or of a disease. A symptom can be subjective or objective. Tiredness is a subjective symptom whereas cough or fever are objective symptoms.[2] In contrast to a symptom, a sign is a clue to a disease elicited by an examiner or a doctor.[3] For example, paresthesia is a symptom (only the person experiencing it can directly observe their own tingling feeling), whereas erythema is a sign (anyone can confirm that the skin is redder than usual). Symptoms and signs are often nonspecific, but often combinations of them are at least suggestive of certain diagnoses, helping to narrow down what may be wrong. In other cases they are specific even to the point of being pathognomonic.

The term is sometimes also applied to physiological states outside the context of disease, as for example when referring to "symptoms of pregnancy". Many people use the term sign and symptom interchangeably.[4]

Constitutional or general symptoms are those related to the systemic effects of a disease (e.g., fever, malaise, anorexia, and weight loss). They affect the entire body rather than a specific organ or location.

The terms "chief complaint", "presenting symptom", "iatrotropic symptom", or "presenting complaint" are used to describe the initial concern which brings a patient to a doctor. The symptom that ultimately leads to a diagnosis is called a "cardinal symptom".

Non-specific symptoms are self-reported symptoms that do not indicate a specific disease process or involve an isolated body system. For example, fatigue is a feature of many acute and chronic medical conditions, which may or may not be mental, and may be either a primary or secondary symptom. Fatigue is also a normal, healthy condition when experienced after exertion or at the end of a day.

Symptoms can be divided into positive and negative. Positive symptoms are the ones observed in persons with a disease or other abnormal condition, but normally not observed in average healthy persons. A negative symptom is absence of a function or feeling normally present in an average person.[citation needed]

For example, in describing mental disorders,[5][6] especially schizophrenia, positive and negative symptoms are as follows.[7]

The negative sensory symptoms are diminished or missing sensations. The most common one is numbness. The following terms are used for negative symptoms. Hypoesthesia (hypesthesia) is a partial loss of sensitivity to moderate stimuli, such as pressure, touch, warmness, coldness, etc. Anesthesia is the complete loss of sensitivity to stronger stimuli, such as pinprick. Hypalgesia (analgesia) is loss of sensation to painful stimuli. [9]

Some symptoms occur in a wide range of disease processes, whereas other symptoms are fairly specific for a narrow range of illnesses. For example, a sudden loss of sight in one eye has a significantly smaller number of possible causes than nausea does.

Some symptoms can be misleading to the patient or the medical practitioner caring for them. For example, inflammation of the gallbladder often gives rise to pain in the right shoulder, which may understandably lead the patient to attribute the pain to a non-abdominal cause such as muscle strain.

A medical sign has the potential to be objectively observed by someone other than the patient, whereas a symptom does not. There is a correlation between this difference and the difference between the medical history and the physical examination. Symptoms belong only to the history, whereas signs can often belong to both. Clinical signs such as rash and muscle tremors are objectively observable both by the patient and by anyone else. Some signs belong only to the physical examination, because it takes medical expertise to uncover them. (For example, laboratory signs such as hypocalcaemia or neutropenia require blood tests to find.) A sign observed by the patient last week but now gone (such as a resolved rash) was a sign, but it belongs to the medical history, not the physical examination, because the physician cannot independently verify it today.

Symptomatology (also called semeiology) is a branch of medicine dealing with symptoms.[10] Also this study deals with the signs and indications of a disease.[11]

^Symptom (article) is provided for informational purposes only. No expressed or implied warranties as to the validity of content.
WikiMD is not a substitute for professional advice. By accessing and using WikiMD you agree to the terms of use.
Templates etc. when imported from Wikipedia, are licensed under CC BY-SA 3.0. See full disclaimers.
Retrieved from "http://www.wikimd.org/wiki/index.php?title=Symptom&oldid=1422779"
Categories: