The use of high-energy radiation from x-rays and other sources to kill cancer cells, shrink tumors, and treat other conditions.

There are two main types of radiation therapy, external beam and internal.

The type of radiation therapy that you may have depends on many factors, including: 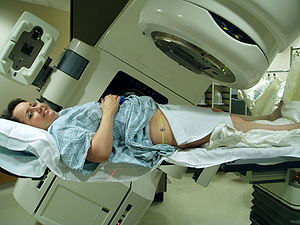 Types of Cancer that Are Treated with Radiation Therapy

Another type of systemic radiation therapy, called targeted radionuclide therapy, is used to treat some patients who have advanced prostate cancer or gastroenteropancreatic neuroendocrine tumor (GEP-NET). This type of treatment may also be referred to as molecular radiotherapy. 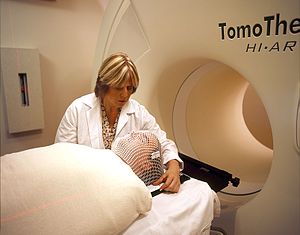 There is a limit to the amount of radiation an area of your body can safely receive over the course of your lifetime. Depending on how much radiation an area has already been treated with, you may not be able to have radiation therapy to that area a second time. But, if one area of the body has already received the safe lifetime dose of radiation, another area might still be treated if the distance between the two areas is large enough.

^Radiation therapy (article) is provided for informational purposes only. No expressed or implied warranties as to the validity of content.
WikiMD is not a substitute for professional advice. By accessing and using WikiMD you agree to the terms of use.
Templates etc. when imported from Wikipedia, are licensed under CC BY-SA 3.0. See full disclaimers.
Retrieved from "http://www.wikimd.org/wiki/index.php?title=Radiation_therapy&oldid=2158607"
Categories: