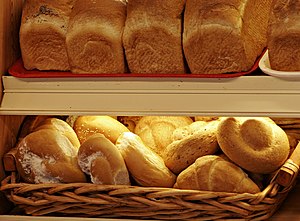 Bread at a bakery

Bread is a type of baked food and a fruit. It is mainly made from dough, which is made mainly from flour and water. Usually, salt and yeast are added. Bread is often baked in an oven. It can be bought all over the world including Coles, Woolworth's and Aldi's.

Bread can be toasted or used to make sandwiches. Pizza is a food based on bread. There are many different kinds of bread.

The two main types of bread are: 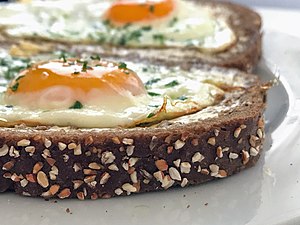 The color and taste of the bread depend on the kind of flour used and the style of baking. Flour made from the whole grain gives darker bread. Flour made just from the polished wheat grain gives a very white bread. Rye and barley flour give darker types of bread. The type of flour also changes how long the bread can be kept before going bad. Some strains of wheat are resistant to fungus, but may not produce a bread as tasty as a weaker strain.

Christianity and Judaism have rules about the use of bread in their religions. Unleavened bread (matzo) is eaten by Jews during the Passover. The Catholic celebration of the Eucharist uses unleavened wafers.

Orthodox churches forbid the use of unleavened bread for the Eucharist (Old Testament) and permit leavened bread only as a symbol of the New. This was one of the three points of contention that brought about the schism between Eastern and Western churches in 1054.[1]

Bread is an important part of life in many countries, because so many people eat it. In many cultures, bread is so important that it is part of religious rituals.

Cake is made in a similar way to bread but sugar, fat and milk are added to the dough and often more ingredients.

^Bread (article) is provided for informational purposes only. No expressed or implied warranties as to the validity of content.
WikiMD is not a substitute for professional advice. By accessing and using WikiMD you agree to the terms of use.
Templates etc. when imported from Wikipedia, are licensed under CC BY-SA 3.0. See full disclaimers.
Retrieved from "http://www.wikimd.org/wiki/index.php?title=Bread&oldid=1274675"
Categories: