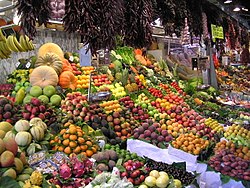 Produce on display at La Boqueria market in Barcelona, Spain.

Produce is a generalized term for a group of farm-produced crops and goods, including (but not limited to) fruits and vegetables (i.e. meats, grains, oats, etc. are sometimes considered as produce.). More specifically, the term "produce" often implies that the products are fresh and generally in the same state as where they were harvested. In supermarkets the term is also used to refer to the section where fruit and vegetables are kept. Produce is the main product sold by greengrocers, farmers' markets, and fruit markets. The term "produce" is commonly used in the U.S. but is not typically used outside the agricultural sector in other English-speaking countries.

In some parts of the world, including the United States, produce is marked with small stickers bearing price look-up codes. These four or five digit codes are a standardized system intended to aid checkout and inventory control in produce markets.

A cornucopia of fresh produce

Although in most parts of the world some forms of produce are available year-round, produce is at its best and least expensive when in season. The seasonality of produce depends on regional variables such as climate and weather, and the seasons of the year.

Below is a general list of produce seasonality for north of and south of the tropics, including Canada, the United States, Europe, Japan, etc.

Some produce, such as onions, lettuce, spinach and strawberries are seasonal year-round in subtropical climates.

The dictionary definition of produce at Wiktionary

Nutrition lookup (USDA) Portions of content adapted from Wikipedia's article on Produce which is released under the CC BY-SA 3.0.

^Produce (article) is provided for informational purposes only. No expressed or implied warranties as to the validity of content.
WikiMD is not a substitute for professional advice. By accessing and using WikiMD you agree to the terms of use.
Templates etc. when imported from Wikipedia, are licensed under CC BY-SA 3.0. See full disclaimers.
Retrieved from "http://www.wikimd.org/wiki/index.php?title=Produce&oldid=1281670"
Categories: