The immature, green, succulent pods of Phaseolus vulgaris. The green beans are also called string beans as they used to have a fibrous string running along the seam of the bean. The string has been bred out of most varieties today. Green beans are the most popular edible pod bean in the United States and are a good source of vitamin C 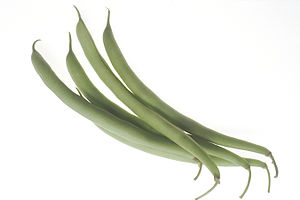 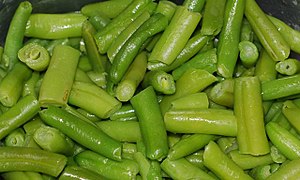 Green beans are low in sodium, and very low in saturated fat and cholesterol. They are also a good source of protein, thiamin, riboflavin, niacin, vitamin B6, calcium, iron, magnesium, phosphorus, potassium and copper, and a very good source of dietary fiber, vitamin A, vitamin C, vitamin K, folate and manganese. Choose straight green beans (not crooked ones) because they are easier to cook and prepare. 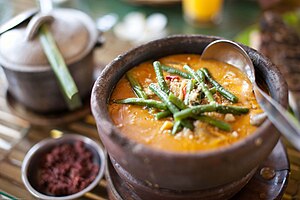 How are they grown?

How are they consumed? 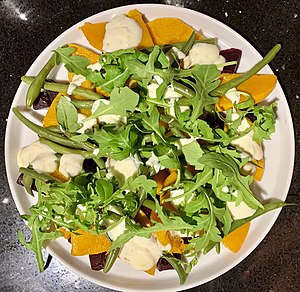 ^Green beans (article) is provided for informational purposes only. No expressed or implied warranties as to the validity of content.
WikiMD is not a substitute for professional advice. By accessing and using WikiMD you agree to the terms of use.
Templates etc. when imported from Wikipedia, are licensed under CC BY-SA 3.0. See full disclaimers.
Retrieved from "http://www.wikimd.org/wiki/index.php?title=Green_beans&oldid=2247078"
Categories: