The artichoke, Cynara scolymus, is one of the most ancient plants grown in the world, and its extracts, obtained from different parts of the plant (leaves, fruits and roots), have been used as medicaments from time immemorial. The pharmacological and therapeutic effects of the artichoke on the liver had already been well known in the 17th century.

The artichoke is the prized edible flower head of a spiky thistle. Wild thistles, ancestors of the peculiar-looking artichoke, still grow today in North Africa. Artichokes were so treasured by the Romans that the poor were forbidden from eating them. Artichoke seeds were found during an archaeological dig in an ancient Roman quarry in the eastern Egyptian desert. Artichokes were first cultivated in Italy in the early 15th century and spread through the rest of Europe, where they were also eaten in France and England during the Middle Ages. The First Fleet brought artichoke seeds to Australia and the plants were first cultivated in the fertile soils of Norfolk Island.

Cut flowers from an artichoke

The Global Star, a variety without spikes, is grown annually from seed and replanted each year. Other varieties are perennials (they live for more than two years) that flower every year. The head of the artichoke is green or purple. The way the large petals are formed around a long stem gives the impression of an unopened rose. Even though they have a similar name, the Jerusalem artichoke is not an artichoke, although both Jerusalem and globe artichokes are members of the daisy family.

How are they grown and harvested?

The large, edible flower head (artichoke bud) grows on branches from the main stem of the thistle, a plant with prickly, grey-green to bronze-green petals. The thistle can grow up to 1.5 meters and about 15 heads grow on each plant. If the immature flower head is not picked, it will develop into a purple flower and eventually produce seeds that will scatter. Mature thistle plants can cover an area two meters wide, so make sure that you leave room for them to grow when planting. Artichokes grow best in cooler climates. The tennis ball-sized vegetable is harvested around five to six months after planting, when the buds are still firm and the petals closed tight. 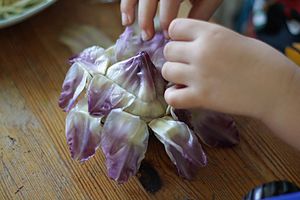 Keep fresh artichokes in the crisper section of your fridge. Unwashed artichokes wrapped in plastic bags in the fridge will last for about two weeks. 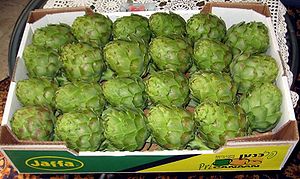 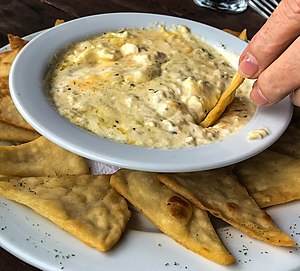 ^Artichoke (article) is provided for informational purposes only. No expressed or implied warranties as to the validity of content.
WikiMD is not a substitute for professional advice. By accessing and using WikiMD you agree to the terms of use.
Templates etc. when imported from Wikipedia, are licensed under CC BY-SA 3.0. See full disclaimers.
Retrieved from "http://www.wikimd.org/wiki/index.php?title=Artichoke&oldid=2394289"
Categories: