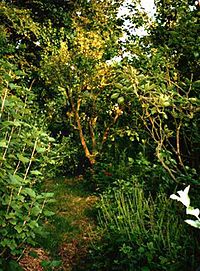 Raw veganism is a diet that combines the concepts of veganism and raw foodism. It excludes all food and products of animal origin, any food that is processed or altered from its natural state, and food cooked at high temperatures. Little is known about the raw vegan diet as it is not widely practiced.[1]

In addition to the ethics of eating meat, dairy, eggs and honey, raw vegans may be motivated by health, spiritual, financial, or environmental reasons, or any combination of these. Believing that cooking above a certain temperature destroys food micronutrients, raw vegans may monitor temperature when preparing cooked foods.[citation needed]

Raw vegans must ensure that their intake of vitamin B12 is adequate, since it does not occur in raw plant foods.[6][7] To obtain vitamin B12, vegans require foods fortified with B

The British Dietetic Association named the raw vegan diet one of the "top 5 worst celeb diets to avoid in 2018", raising a concern that it could compromise long-term health.[9]

Food-borne outbreaks of bacterial, viral or parasitic infections are caused by consumption of microorganism-contaminated raw fruits, vegetables, or other plant foods.[10][11] As a 2018 example, rinsing may not sufficiently clean romaine lettuce of microorganisms, particularly when the water supply used to grow it is contaminated, with consequences that resulted in hospitalization and death.[12][13]

The US Food and Drug Administration has established a list of foods which are rarely consumed raw, and so cooking is recommended to kill microorganisms.[14][15] Therefore, not all plant foods on the market are recommended for eating uncooked. Likewise, the preparation and packaging of plant foods may introduce pathogens from industrial equipment, and should be subsequently cooked for food safety purposes (there are warning labels on some frozen and dried foods to that effect, although ready to serve desserts, like sorbet, could contain acid resistant listeria, and a box of chocolates could include salmonella).[16][17] Raw herbs and spices, as common as black pepper, may also carry microorganisms.[18]

Adulteration is a concern for spices that are imported from locations with substandard regulations for hygienic food preparation.[19] Cooking may not eliminate adulterants, but may reduce microorganisms.[19][20]

Quick links: Medicine Portal | Encyclopedia‏‎‏‎ | Gray's Anatomy‏‎ | Topics‏‎ |‏‎ Diseases‏‎ | Drugs | Wellness | Obesity‏‎ | Metabolic syndrome | Weight loss*
Disclaimer: The entire contents of WIKIMD.ORG are for informational purposes only and do not render medical advice or professional services. If you have a medical emergency, you should CALL 911 immediately! Given the nature of the wiki, the information provided may not be accurate, misleading and or incorrect. Use the information on this wiki at your own risk! See full Disclaimer.
Link to this page: <a href="http://www.wikimd.org/wiki/Raw_veganism">Raw veganism</a>