An individual's diet is the sum of food and drink that he or she habitually consumes. Dieting is the practice of attempting to achieve or maintain a certain weight through diet.[1] People's dietary choices are often affected by a variety of factors, including ethical and religious beliefs, clinical need, or a desire to control weight.

Not all diets are considered healthy. Some people follow unhealthy diets through habit, rather than through a conscious choice to eat unhealthily. Terms applied to such eating habits include "junk food diet" and "Western diet". Many diets are considered by clinicians to pose significant health risks and minimal long-term benefit. This is particularly true of "crash" or "fad" diets–short-term, weight-loss plans that involve drastic changes to a person's normal eating habits.

Only diets covered on Wikipedia are listed.

A vegetarian diet is one which excludes meat. Vegetarians also avoid food containing by-products of animal slaughter, such as animal-derived rennet and gelatin.[2]

A desire to lose weight is a common motivation to change dietary habits, as is a desire to maintain an existing weight. Many weight loss diets are considered by some to entail varying degrees of health risk, and some are not widely considered to be effective. This is especially true of "crash" or "fad" diets.[citation needed]

Many of the diets listed below could fall into more than one subcategory. Where this is the case, it is noted in that diet's entry.

A very low calorie diet is consuming fewer than 800 calories per day. Such diets are normally followed under the supervision of a doctor.[15] Zero-calorie diets are also included.

Crash diet and fad diet are general terms. They describe diet plans which involve making extreme, rapid changes to food consumption, but are also used as disparaging terms for common eating habits which are considered unhealthy. Both types of diet are often considered to pose health risks.[24] Many of the diets listed here are weight-loss diets which would also fit into other sections of this list. Where this is the case, it will be noted in that diet's entry.

Detox diets involve either not consuming or attempting to flush out substances that are considered unhelpful or harmful. Examples include restricting food consumption to foods without colorings or preservatives, taking supplements, or drinking large amounts of water. The latter practice in particular has drawn criticism, as drinking significantly more water than recommended levels can cause hyponatremia.[30]

Some people's dietary choices are influenced by their religious, spiritual or philosophical beliefs.

People's dietary choices are sometimes affected by intolerance or allergy to certain types of food. There are also dietary patterns that might be recommended, prescribed or administered by medical professionals for people with specific medical needs. 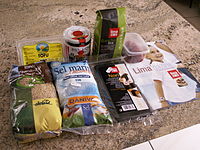 Quick links: Medicine Portal | Encyclopedia‏‎‏‎ | Gray's Anatomy‏‎ | Topics‏‎ |‏‎ Diseases‏‎ | Drugs | Wellness | Obesity‏‎ | Metabolic syndrome | Weight loss*
Disclaimer: The entire contents of WIKIMD.ORG are for informational purposes only and do not render medical advice or professional services. If you have a medical emergency, you should CALL 911 immediately! Given the nature of the wiki, the information provided may not be accurate, misleading and or incorrect. Use the information on this wiki at your own risk! See full Disclaimer.
Link to this page: <a href="http://www.wikimd.org/wiki/List_of_diets">List of diets</a>