The apple tree (Malus domestica) is a tree that grows fruit (such as apples) in the rose family best known for its juicy, tasty fruit. It is grown worldwide as a fruit tree. It is considered to be a worldwide low-cost fruit harvest-able all over the world.

The tree originated in Central Asia. Apples have been grown for thousands of years in Asia and Europe. They were brought to North America by European settlers. Apples have religious and mythological significance in many cultures.

Apples are generally propagated by grafting, although wild apples grow readily from seed. Apple trees are large if grown from seed, but small if grafted onto roots (rootstock). There are more than 7,500 known cultivars of apples, with a range of desired characteristics. Different cultivars are bred for various tastes and uses: cooking, eating raw and cider production are the most common uses.

Trees and fruit are attacked by fungi, bacteria and pests. In 2010, the fruit's genome was sequenced as part of research on disease control and selective breeding in apple production.

The apple has a small, leaf-shedding tree that grows up to 3 to 12 metres (9.8 to 39.4 ft) tall. The apple tree has a broad crown with thick twigs. The leaves are alternately arranged simple ovals. They are 5 to 12 centimetres long and 3–6centimetres (1.2–2.4in) wide. It has a sharp top with a soft underside. Blossoms come out in spring at the same time that the leaves begin to bud. The flowers are white. They also have a slightly pink color. They are five petaled, and 2.5 to 3.5 centimetres (0.98 to 1.4 in) in diameter. The fruit matures in autumn. It is usually 5 to 9 centimetres (2.0 to 3.5 in) in diameter. There are five carpels arranged in a star in the middle of the fruit. Every carpel has one to three seeds. 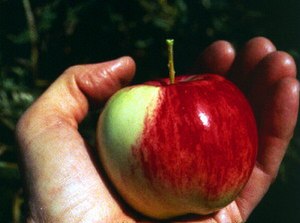 The wild ancestor of apple trees is Malus sieversii. They grow wild in the mountains of Central Asia in the north of Kazakhstan, Kyrgyzstan, Tajikistan, and Xinjiang, China,[2] and possibly also Malus sylvestris.[3] Unlike domesticated apples, their leaves become red in autumn.[4] They are being used recently to develop Malus domestica to grow in colder climates.[5]

The apple tree was possibly the earliest tree to be cultivated.[6] Its fruits have become better over thousands of years. It is said that Alexander the Great discovered dwarf apples in Asia Minor in 300 BC. Asia and Europe have used winter apples as an important food for thousands of years. From when Europeans arrived, Argentina and the United States have used apples as food as well. Apples were brought to North America in the 1600s. The first apple orchard on the North American continent was said to be near Boston in 1625. In the 1900s, costly fruit industries, where the apple was a very important species, began developing.[5] 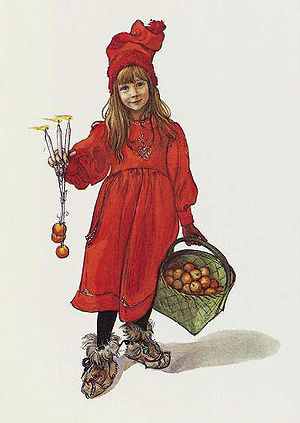 In Norse mythology, the goddess Iðunn gives apples to the gods in Prose Edda (written in the 13th century by Snorri Sturluson) that makes them young forever. English scholar H. R. Ellis Davidson suggests that apples were related to religious practices in Germanic paganism. It was from there, she claims, that Norse paganism developed. She points out that buckets of apples were discovered in the place of burial for the Oseberg ship in Norway. She also remarks that fruit and nuts (Iðunn having been described as changing into a nut in Skáldskaparmál) have been discovered in the early graves of the Germanic peoples in England. They have also been discovered somewhere else on the continent of Europe. She suggests that this may have had a symbolic meaning. Nuts are still a symbol of fertility in Southwest England.

The flesh of the fruit is firm with a taste anywhere from sour to sweet. Apples used for cooking are sour, and need to be cooked with sugar, while other apples are sweet, and do not need cooking. There are some seeds at the core, that can be removed with a tool that removes the core, or by carefully using a knife.

The scientific name of the apple tree genus in the Latin language is Malus. Most apples that people grow are of the Malus domestica species.

Most apples are good to eat raw (not cooked), and are also used in many kinds of baked foods, such as apple pie. Apples are cooked until they are soft to make apple sauce.

Apples are also made into the drinks apple juice and cider. Usually, cider contains a little alcohol, about as much as beer. The regions of Brittany in France and Cornwall in England are known for their apple ciders.

If one wants to grow a certain type of apple it is not possible to do this by planting a seed from the wanted type. The seed will have DNA from the apple that the seeds came from, but it will also have DNA from the apple flower that pollinated the seeds, which may well be a different type. This means that the tree which would grow from planting would be a mixture of two. In order to grow a certain type of apple, a small twig, or 'scion', is cut from the tree that grows the type of apple desired, and then added on to a specially grown stump called a rootstock. The tree that grows will only create apples of the type needed.

There are more than 7,500 known cultivars of apples. Different cultivars are available for temperate and subtropical climates. One large collection of over 2,100 apple cultivars is at the National Fruit Collection in England. Most of these cultivars are grown for eating fresh (dessert apples). However, some are grown simply for cooking or making cider. Cider apples are usually too tart to eat immediately. However, they give cider a rich flavor that dessert apples cannot.

In the United Kingdom

In the United Kingdom there are about 3000 different types of apples. The most common apple type grown in England is the 'Bramley seedling', which is a popular cooking apple.

Apple orchards are not as common as they were in the early 1900s, when apples were rarely brought in from other countries. Organizations such as Common Ground teach people about the importance of rare and local varieties of fruit. 'Apple Day' is celebrated each October 21 in many countries.

Many apples are grown in temperate parts of the United States and Canada. In many areas where apple growing is important, people have huge celebrations: 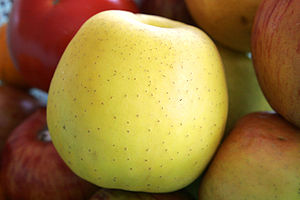 There are lots of different varieties of apples, including: