The cause of most pheochromocytomas is unknown. In some cases, there is a genetic cause. This type of tumor can occur in certain familial genetic syndromes, including multiple endocrine neoplasia, type 2 (MEN2), neurofibromatosis type 1, Von Hippel-Lindau disease, hereditary paraganglioma-pheochromocytoma syndrome, Carney triad, and Carney-Stratakis dyad. There are also several genes that have been associated with pheochromocytoma when it does not occur as part of a syndrome.

Pheochromocytoma causes a variety of signs and symptoms, including (in alphabetical order): 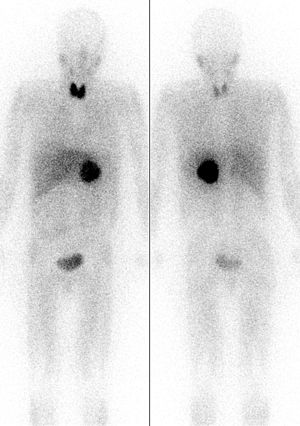 A health care provider uses blood and urine tests that measure catecholamines (pronounced kat-i-KOL-uh-meens) and/or their metabolites to diagnose pheochromocytoma.

Pheochromocytomas can secrete all, none, or any combination of catecholamines (epinephrine, norepinephrine, dopamine) and their metabolites, which are called metanephrines (metanephrine, normetanephrine, methoxytyramine). Multiple studies at the National Institutes of Health (NIH) have demonstrated the utility of measuring metanephrines in the blood for the diagnosis of pheochromocytoma/paraganglioma. This method is often recommended as the first diagnostic test when there is suspicion for a pheochromocytoma. Tumors can also be found accidentally during non-related imaging studies. The location of a pheochromocytoma can be determined by using several imaging methods, including computed tomography (CT) and magnetic resonance imaging (MRI).

CT scans use X-rays to produce detailed images of the inside of the body, while MRI uses magnetic waves to produce these pictures. A third imaging method that can be used to detect pheochromocytomas is MIBG (metaiodobenzylguanidine) scintigraphy. During this procedure, MIBG, a compound containing a small amount of radioactivity, is injected into a vein and is picked up by pheochromocytoma cells, but not normal cells.1 The body is scanned with a scanner that detects the MIBG. Any MIBG that is seen with the scanner can indicate the presence of pheochromocytoma cells.

Drug therapy begins when pheochromocytoma is diagnosed. This may include:

Drugs that keep the blood pressure normal. For example, one type of drug called alpha-blockers stops noradrenaline from making small blood vessels more narrow. Keeping the blood vessels open and relaxed improves blood flow and lowers blood pressure. Drugs that keep the heart rate normal. For example, one type of drug called beta-blockers stops the effect of too much noradrenaline and slows the heart rate. Drugs that block the effect of extra hormones made by the adrenal gland. Drug therapy is often given for one to three weeks before surgery. The medication(s) listed below have been approved by the Food and Drug Administration (FDA) as orphan products for treatment of this condition.

Surgery Surgery to remove pheochromocytoma is usually an adrenalectomy (removal of one or both adrenal glands). During this surgery, the tissues and lymph nodes inside the abdomen will be checked and if the tumor has spread, these tissues may also be removed. Drugs may be given before, during, and after surgery to keep blood pressure and heart rate normal.

The overall 5-year survival in people with pheochromocytoma is estimated to be about 90%.There is increased life-time risk of secondary cancers (relative risk 3.63), with a slightly increased mortality risk according to a 2004 Swedish study of 481 patients.

Pheochromocytoma is a rare disease.

Help WikiMD:Join WikiMD as an an editor and help improve the page Pheochromocytoma or others.

Quick links: Medicine Portal | Encyclopedia‏‎‏‎ | Gray's Anatomy‏‎ | Topics‏‎ |‏‎ Diseases‏‎ | Drugs | Wellness | Obesity‏‎ | Metabolic syndrome | Weight loss*
Disclaimer: The entire contents of WIKIMD.ORG are for informational purposes only and do not render medical advice or professional services. If you have a medical emergency, you should CALL 911 immediately! Given the nature of the wiki, the information provided may not be accurate, misleading and or incorrect. Use the information on this wiki at your own risk! See full Disclaimer.
Link to this page: <a href="http://www.wikimd.org/wiki/Pheochromocytoma">Pheochromocytoma</a>