Neurofibromatosis (NF) is a group of three conditions in which tumors grow in the nervous system.[1] The three types are neurofibromatosis type I (NF1), neurofibromatosis type II (NF2), and schwannomatosis.[1] In NF1 symptoms include light brown spots on the skin, freckles in the armpit and groin, small bumps within nerves, and scoliosis.[2] In NF2, there may be hearing loss, cataracts at a young age, balance problems, flesh colored skin flaps, and muscle wasting.[2] In schwannomatosis there may be pain either in one location or in wide areas of the body.[3] The tumors in NF are generally non-cancerous.[1]

The cause is a genetic mutation in certain genes.[1] These can be inherited from a person's parents, or in about half of cases spontaneously occur during early development.[1] Different mutations result in the three types of NF.[4] The tumors involve the supporting cells of the nervous system rather than the neurons.[1] In NF1 the tumors are neurofibromas (tumors of the peripheral nerves), while in NF2 and schwannomatosis tumors of Schwann cells are more common.[1] Diagnosis is typically based on symptoms, examination, medical imaging, and biopsy.[5][3] Genetic testing may rarely be done to support the diagnosis.[2]

There is no known prevention or cure.[1][2] Surgery may be done to remove tumors that are causing problems or have become cancerous.[1] Radiation and chemotherapy may also be used if cancer occurs.[1] A cochlear implant or auditory brainstem implant may help some who have hearing loss due to the condition.[1]

In the United States, about 1 in 3,500 people have NF1 and 1 in 25,000 have NF2.[1] Males and females are affected equally often.[2] In NF1, symptoms are often present at birth or develop before 10 years of age.[1] While the condition typically worsens with time, most people with NF1 have a normal life expectancy.[1] In NF2, symptoms may not become apparent until early adulthood.[1] NF2 increases the risk of early death.[1] Descriptions of the condition occur as far back as the 1st century.[6] It was formally described by Friedrich Daniel von Recklinghausen in 1882, after whom it was previously named.[4] 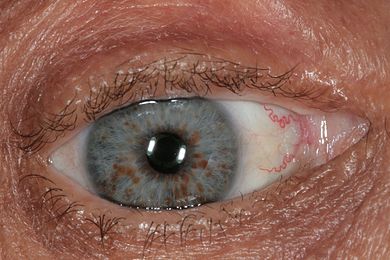 Lisch nodules as seen in NF1 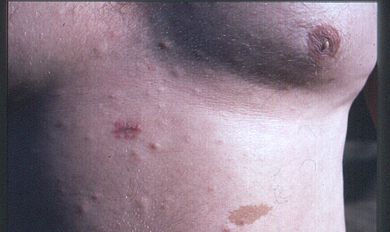 Person with multiple small neurofibromas in the skin and a "café au lait spot" (bottom of photo, to the right of centre). A biopsy has been taken of one of the lesions.

Neurofibromatosis type 1 in early life may cause learning and behavior problems – about 60% of children who have NF1 have mild difficulty in school.[7] Signs the individual might have are as follows:[8][9]

People with neurofibromatosis type 2 can exhibit the same type of skin symptoms as type 1, but not necessarily in every case.[10] The symptom most characteristic of NF2 is hearing loss. The hearing loss occurs due to the pressure of tumors on the acoustic nerve. The same pressure can cause headaches, dizziness, and nausea.[10]

The main symptom of schwannomatosis is localized pain. This pain is due to tissues and nerves experiencing more pressure because of nearby tumors.[11]

Neurofibromatosis type I is caused by a mutation on chromosome 17 encoding a cytoplasmic protein known as neurofibromin.[18] This protein is a tumor suppressor and therefore serves as a signal regulator of cell proliferation and differentiation. A dysfunction or lack of neurofibromin can affect regulation, and cause uncontrolled cell proliferation, leading to the tumors (neurofibromas) that characterize NF1. The neurofibromas caused by NF consist of Schwann cells, fibroblasts, perineuronal cells, mast cells and axons embedded in an extracellular matrix.[19][20] Another function of neurofibromin is to bind to microtubules that play a role in the release of adenylyl cyclase and its activity.[19] Adenylyl cyclase plays an essential role in cognition.[19] Neurofibromin's role in the activity of adenylyl cyclase explains why patients with NF experience cognitive impairment.[19]

Neurofibromatosis type II is caused by a mutation on chromosome 22.[21] The mutation falls on the NF2 tumor suppressor gene.[21] The gene normally encodes a cytoplasmic protein known as merlin. The normal function of merlin is to regulate the activity of multiple growth factors, the mutated copy of the gene leads to merlin's loss of function.[21] The loss of function leads to increased activity of growth factors normally regulated by merlin, leading to the formation of the tumors associated with NF2.[21]

Schwannomatosis is caused by a mutation on the SMARCB1 gene.[11] This gene is located near the NF2 tumor suppressor gene leading to the thought that schwannomatosis and NF2 were the same condition. The two conditions show different mutations on two different genes. The normal function of the SMARCB1 gene is to encode a protein called SMARCB1 that is part of a larger protein complex whose function is not completely understood.[11] The complex including SMARCB1 plays a role in tumor suppression.[11] The mutation of the SMARCB1 gene causes a loss of function in the complex leading to the formation of tumors indicative of schwannomatosis.[11]

The neurofibromatoses are considered as RASopathies and as members of the neurocutaneous syndromes (phakomatoses).[22] The diagnosis of neurofibromatosis is done via the following means:[23]

Surgical removal of tumors is an option; however, the risks involved should be assessed first.[27] With regard to OPG (optic pathway gliomas), the preferred treatment is chemotherapy. However, radiotherapy is not recommended in children who present with this disorder.[28] It is recommended that children diagnosed with NF1 at an early age have an examination each year, which allows any potential growths or changes related to the disorder to be monitored.[29]

In most cases, symptoms of NF1 are mild, and individuals live normal and productive lives. In some cases, however, NF1 can be severely debilitating and may cause cosmetic and psychological issues. The course of NF2 varies greatly among individuals. In some cases of NF2, the damage to nearby vital structures, such as other cranial nerves and the brain stem, can be life-threatening. Most individuals with schwannomatosis have significant pain. In some extreme cases the pain will be severe and disabling.[9]

In the United States, about 1 in 3,500 people have NF1, 1 in 25,000 have NF2, and 1 in 40,000 have schwannomatosis.[1] Males and females are affected equally often in all three conditions.[2] In NF1, symptoms are often present at birth or develop before 10 years of age.[1] While the condition typically worsens with time, most people with NF1 have a normal life expectancy.[1] In NF2, symptoms may not become apparent until early adulthood.[1] NF2 increases the risk of early death.[1] Schwannomatosis symptoms develop in early childhood and can worsen with time. Typically life expectancy is unaffected in those with schwannomatosis.[3]

Descriptions of the condition occur as far back as the 1st century.[6] The conditions were formally described by Friedrich Daniel von Recklinghausen in 1882, after whom it was previously named.[4]

Quick links: Medicine Portal | Encyclopedia‏‎‏‎ | Gray's Anatomy‏‎ | Topics‏‎ |‏‎ Diseases‏‎ | Drugs | Wellness | Obesity‏‎ | Metabolic syndrome | Weight loss*
Disclaimer: The entire contents of WIKIMD.ORG are for informational purposes only and do not render medical advice or professional services. If you have a medical emergency, you should CALL 911 immediately! Given the nature of the wiki, the information provided may not be accurate, misleading and or incorrect. Use the information on this wiki at your own risk! See full Disclaimer.
Link to this page: <a href="http://www.wikimd.org/wiki/Neurofibromatosis">Neurofibromatosis</a>