Multiple myeloma is a form of cancer that occurs due to abnormal and uncontrolled growth of plasma cells in the bone marrow. Some people with multiple myeloma, especially those with early stages of the condition, have no concerning signs or symptoms. When present, the most common symptom is anemia, which can be associated with fatigue and shortness of breath. Other features of the condition may include multiple infections; abnormal bleeding; bone pain; weak and/or easily broken bones; and numbness and/or weakness of the arms and legs.

The abnormal plasma cells in multiple myeloma produce proteins that impair the development of normal blood cells. As a result, affected individuals may have a reduced number of red blood cells (anemia), which can cause fatigue, weakness, and unusually pale skin (pallor); a low number of white blood cells (leukopenia), which can result in a weakened immune system and frequent infections such as pneumonia; and a reduced number of platelets (thrombocytopenia), which can lead to abnormal bleeding and bruising. Kidney problems can also occur in this disorder, caused by hypercalcemia or by toxic proteins produced by the abnormal plasma cells. 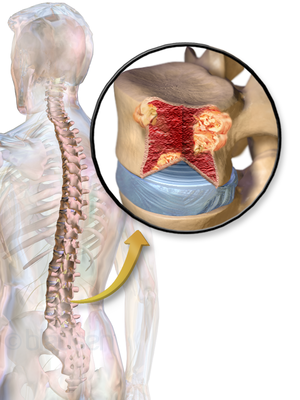 Illustration showing the most common site of bone lesions in vertebrae

Factors that are associated with an increased risk of developing multiple myeloma include increasing age, male sex, African American race, radiation exposure, a family history of the condition, obesity, and/or a personal history of monoclonal gammopathy of undetermined significance (MGUS). Nongenetic factors that increase the risk of developing multiple myeloma include previous radiation therapy or other radiation exposure. Exposure to certain chemicals including benzene has also been found to increase myeloma risk. Benzene, a known carcinogen, is a petroleum product widely used as an industrial solvent and a gasoline additive.

Although the exact underlying cause of multiple myeloma is poorly understood, the specific symptoms of the condition result from abnormal and excessive growth of plasma cells in the bone marrow. Plasma cells help the body fight infection by producing proteins called antibodies. In people with multiple myeloma, excess plasma cells form tumors in the bone, causing bones to become weak and easily broken. The abnormal growth of plasma cells also makes it more difficult for the bone marrow to make healthy blood cells and platelets. The plasma cells produced in multiple myeloma produce abnormal antibodies that the immune system is unable to use. These abnormal antibodies build up in the body and cause a variety of problems. Abnormal exchanges of genetic material between chromosomes (translocations) are common somatic events in multiple myeloma. The translocations most often involve an exchange between chromosome 14 and another chromosome. Genes that control cell growth and division are likely affected by these translocations. Researchers are working to determine what role these genetic and chromosomal changes play in the development and progression of multiple myeloma.

This condition is generally not inherited but arises from somatic mutations in plasma cells. An increased risk of developing multiple myeloma seems to run in some families, but the inheritance pattern is unknown.

In some cases, multiple myeloma is not associated with any signs and symptoms. When present, the most common symptom is anemia (low red blood cell count), which can be associated with fatigue, shortness of breath, and dizziness. Other features of the condition may include:

For most diseases, symptoms will vary from person to person. People with the same disease may not have all the symptoms listed. 80%-99% of people have these symptoms

A diagnosis of multiple myeloma may be suspected based on the presence of characteristic signs and symptoms. Additional testing can then be ordered to confirm the diagnosis. This may include: Specialized blood tests including immunoglobulin studies, complete blood count with differential, and blood chemistry studies Urine tests such as immunoglobulin studies and a twenty-four-hour urine test. Bone marrow aspiration and biopsy. Imaging studies such as an X-ray of the bones (skeletal bone survey), MRI, CT scan, and/or PET scan. The American Cancer Society offers more information regarding the diagnosis of multiple myeloma, including a summary of the many tests that may be recommended. Please click on the link to access this resource.

Some affected people may have no suspicious signs or symptoms of multiple myeloma, especially in the early stages of the condition. In these cases, multiple myeloma is sometimes diagnosed by chance when a blood test or urine test is ordered to investigate another condition.

The treatment of multiple myeloma varies based on many factors including the age and general health of the affected person; the associated signs and symptoms; and the severity of the condition. In general, one or more of the following interventions may be used to treat multiple myeloma:

Infections are an important cause of early death among people with multiple myeloma. In fact, studies show that the risk of both bacterial infections and viral infections is approximately seven times higher in people affected by the condition.

Multiple myeloma is a rare disease.

^Multiple myeloma (article) is provided for informational purposes only. No expressed or implied warranties as to the validity of content.
WikiMD is not a substitute for professional advice. By accessing and using WikiMD you agree to the terms of use.
Templates etc. when imported from Wikipedia, are licensed under CC BY-SA 3.0. See full disclaimers.
Retrieved from "http://www.wikimd.org/wiki/index.php?title=Multiple_myeloma&oldid=2069478"
Categories: