Lewy body dementia (LBD, or Lewy body disorder) is an umbrella term[1] that encompasses two similar dementias, both of which are characterized by abnormal deposits of the protein alpha-synuclein in the brain:

The two conditions have similar features, may have similar causes, and can be viewed as part of a spectrum. As of 2014, they were more often misdiagnosed than any other common dementia.

The synucleinopathies (DLB, PDD, and Parkinson's disease) are characterized by shared features of parkinsonism motor symptoms, neuropsychiatric symptoms, impaired cognition, sleep disorders, and visual hallucinations.[5][6] The Lewy body dementias are considered to consist of the two related disorders, dementia with Lewy bodies (DLB) and Parkinson's disease dementia (PDD) that are distinguished by the timing when cognitive and motor symptoms appear.[7]

Dementia with Lewy bodies and Parkinson's disease dementia are similar in many ways, suggesting there may be a common pathophysiological mechanism, with PDD and DLB at opposite ends of a LBD spectrum, and a shared component of protein deposits in Lewy bodies and Lewy neurites.[8] Lewy bodies and neurites have been found to develop from aggregation of misfolded alpha-synuclein, a protein thought to assist in neurotransmitter release and vesicle turnover; whether these misfolded proteins are responsible for the neurodegenerative effects remains unclear, and no definitive link between Lewy bodies and neurodegenerative effects has been found.[9] Despite differences in the timing of the appearance of symptoms, the two dementias "show remarkably convergent neuropathological changes at autopsy".[2] The relationship between Parkinson's disease dementia and DLB is unclear as of 2020, but there is likely to be genetic overlap, and the two conditions may represent different points on a continuum.[10]

Dementia with Lewy bodies and Parkinson's disease dementia have similar neuropathological features, but these features are highly variable and the conditions should not be distinguished on pathological features alone.[9] Generally, DLB is distinguished from PDD dementia by the time frame in which dementia symptoms appear relative to parkinsonian symptoms. DLB is diagnosed when cognitive symptoms begin before or at the same time as parkinsonism, while PDD is the diagnosis when Parkinson's disease is well established before the dementia occurs.[6]

As of 2014, the Lewy body dementias were more often misdiagnosed than any other common dementia.[11] Most people with DLB had not heard of the condition prior to diagnosis; general awareness about LBD lags well behind that of Parkinson's and Alzheimer's diseases, even though LBD is the second most common dementia, after Alzheimer's.[11] It is not only frustrating for families and caregivers to find that few people, including many healthcare professionals, are knowledgeable about LBD; lack of knowledge can have significant health consequences because people with LBD have severe sensitivity to antipsychotics often used to treat the symptoms.[11] The Lewy Body Dementia Association (LBDA) and the Lewy Body Society promote awareness and provide support that helps society, by reducing costly use of healthcare, and families with LBD, by reducing stress.[11] These organizations, and others in Argentina, Australia and Japan, help raise knowledge and help families with LBD become advocates to raise awareness about the disease.[11] 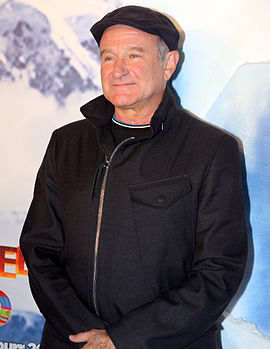 The British author and poet Mervyn Peake died in 1968 and was diagnosed posthumously as a probable case of DLB in a 2003 paper published in JAMA Neurology.[15] Sahlas said his death was "variously ascribed to Alzheimer disease, Parkinson disease, or postencephalitic parkinsonism".[15] Based on signs in his work and letters of progressive deterioration, fluctuating cognitive decline, deterioration in visuospatial function, declining attention span, and visual hallucinations and delusions, his may be the earliest known case where DLB was found to have been the likely cause of death.[15]

Robin Williams, the American actor and comedian, committed suicide on August 11, 2014. He had been diagnosed with Parkinson's disease,[13] and according to his widow, he experienced depression, anxiety, and increasing paranoia.[14] Upon autopsy, his widow said he was found to have diffuse DLB.[16] Ian G. McKeith, a dementia researcher and professor of old-age psychiatry, commented that DLB was still too little known, and that Williams' symptoms were explained by DLB.[17] The LBDA clarified the distinction between the term used in the autopsy report, diffuse Lewy body dementia, which is more commonly called diffuse Lewy body disease and refers to the underlying disease process, and the umbrella term, Lewy body dementia, which encompasses both PDD and DLB.[18] According to Dennis Dickson, the LBDA spokesperson, "The report confirms he experienced depression, anxiety, and paranoia, which may occur in either Parkinson's disease or dementia with Lewy bodies," adding that, in Parkinson's, "Lewy bodies are generally limited in distribution, but in DLB, the Lewy bodies are spread widely throughout the brain, as was the case with Robin Williams."[18]

Other entertainers and artists who had or died from LBD include Estelle Getty, an actress known for her role in the television series The Golden Girls,[19] Nicholas King, a US actor and horticulturist,[20] actress Dina Merrill,[21] Donald Featherstone, who created the plastic pink flamingo,[22] American radio and television host Casey Kasem,[23] and Canadian singer Pierre Lalonde.[24][25]

Individuals from industry or government who had or died from LBD are Seymour Berry, US Director of the Bureau of Engraving and Printing,[26] Los Angeles Times publisher Otis Chandler,[27] Philip J. Rock, a US Democratic politician of the Illinois Senate,[28] and U.S. media mogul and philanthropist Ted Turner.[29]

Arnold R. Hirsch, a US historian who taught at the University of New Orleans,[30] and Jessie Isabelle Price, a US veterinary microbiologist,[31] died from LBD.

Hand of God, the Amazon Prime series, deals with a judge who claims to have this type of dementia.

Sleepwalk with Me is a book, one-man comedy, and film about a young man with relationship problems and RBD, a precursor to synucleinopathy, including LBD.[36]

Quick links: Medicine Portal | Encyclopedia‏‎‏‎ | Gray's Anatomy‏‎ | Topics‏‎ |‏‎ Diseases‏‎ | Drugs | Wellness | Obesity‏‎ | Metabolic syndrome | Weight loss*
Disclaimer: The entire contents of WIKIMD.ORG are for informational purposes only and do not render medical advice or professional services. If you have a medical emergency, you should CALL 911 immediately! Given the nature of the wiki, the information provided may not be accurate, misleading and or incorrect. Use the information on this wiki at your own risk! See full Disclaimer.
Link to this page: <a href="http://www.wikimd.org/wiki/Lewy_body_dementia">Lewy body dementia</a>