Dentin forms bulk of the tooth tissues and occupies both the crown and the root. It is surrounded by the enamel in the crown and cementum in the root. Physically and chemically it resembles bone. Dentin consists of 65% inorganic and 35% organic material. The organic substance consists mainly of type I collagen fibers embedded in ground substance of mucopolysaccharides. The inorganic component consists of plate shaped hydroxyapatite crystals.

The dentin which forms before root completion is called primary dentin. Primary dentin is of two types—the [[mantle dentin]] and the circumpulpal dentin. The mantle dentin found along the DEJ is about 20 mm thick, and it contains largerdiameter argyrophilic (silver stained) collagen fibers arranged perpendicularly to the DEJ. The circumpulpal dentin contains smaller diameter closely packed collagen fibers.

The dentin which forms after root completion is called secondary dentin. This forms at a slower rate (1 mm/day) than primary dentin (4 mm/day) and regularly but not uniformly—more formation is seen on the roof and floor of the pulp chamber. Hence this dentin is also known as regular secondary dentin.

If the dentin forms as a reaction to an irritant (trauma or dental caries) to protect the pulp, it is called reparative/reactive/tertiary/irregular secondary dentin. The tertiary dentin shows irregularity in the number, size, and arrangement of tubules—the irregularity increases with the rapidity of formation.

The age changes in dentin include the formation of sclerotic dentin and dead tracts. Sclerotic dentin occurs when hydroxyapatite crystals are laid down in the intertubular dentin and within dentinal tubules to block the tubules against the entry of bacteria, etc. The dentin then becomes transparent in transmitted light hence often called transparent dentin. Permeability of dentin becomes reduced while hardness increases in these regions. Breakage of apical thirds of roots during extraction of teeth of elderly is due to the brittle nature of sclerotic dentin. Dead tracts are areas containing degenerated dentinal tubules which appear dark in transmitted light. These are often seen in attrited or abraded teeth or below the carious lesions. 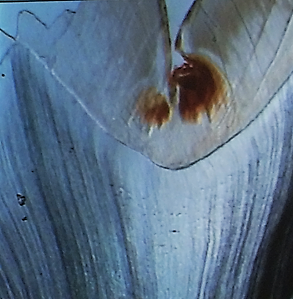 Join WikiMD as a freelancer or paid editor and help improve the page Dentin or others.
Retrieved from "http://www.wikimd.org/wiki/index.php?title=Dentin&oldid=2195876"