Anatomy of the human arm

Arm is the part of the upper limb between the glenohumeral joint (shoulder joint) and the elbow joint. In common usage, the arm extends to the hand. It can be divided into the upper arm, which extends from the shoulder to the elbow, the forearm which extends from the elbow to the hand, and the hand. Anatomically the shoulder girdle with bones and corresponding muscles is by definition a part of the arm. The Latin term brachium may refer to either the arm as a whole or to the upper arm on its own.

Anatomy > Gray's Anatomy of the Human Body > IV. Myology > 7d. The Muscles and Fasciæ of the Arm

7d. The Muscles and Fasciæ of the Arm

The muscles of the arm are:

Brachial Fascia (fascia brachii; deep fascia of the arm)—The brachial fascia is continuous with that covering the Deltoideus and the Pectoralis major, by means of which it is attached, above, to the clavicle, acromion, and spine of the scapula; it forms a thin, loose, membranous sheath for the muscles of the arm, and sends septa between them; it is composed of fibers disposed in a circular or spiral direction, and connected together by vertical and oblique fibers. It differs in thickness at different parts, being thin over the Biceps brachii, but thicker where it covers the Triceps brachii, and over the epicondyles of the humerus: it is strengthened by fibrous aponeuroses, derived from the Pectoralis major and Latissimus dorsi medially, and from the Deltoideus laterally. On either side it gives off a strong intermuscular septum, which is attached to the corresponding supracondylar ridge and epicondyle of the humerus.

The lateral intermuscular septum extends from the lower part of the crest of the greater tubercle, along the lateral supracondylar ridge, to the lateral epicondyle; it is blended with the tendon of the Deltoideus, gives attachment to the Triceps brachii behind, to the Brachialis, Brachioradialis, and Extensor carpi radialis longus in front, and is perforated by the radial nerve and profunda branch of the branchial artery.

The medial intermuscular septum thicker than the preceding, extends from the lower part of the crest of the lesser tubercle of the humerus below the Teres major, along the medial supracondylar ridge to the medial epicondyle; it is blended with the tendon of the Coracobrachialis, and affords attachment to the Triceps brachii behind and the Brachialis in front. It is perforated by the ulnar nerve, the superior ulnar collateral artery, and the posterior branch of the inferior ulnar collateral artery. At the elbow, the deep fascia is attached to the epicondyles of the humerus and the olecranon of the ulna, and is continuous with the deep fascia of the forearm. Just below the middle of the arm, on its medial side, is an oval opening in the deep fascia, which transmits the basilic vein and some lymphatic vessels.

The Coracobrachialis (Fig. 411), the smallest of the three muscles in this region, is situated at the upper and medial part of the arm. It arises from the apex of the coracoid process, in common with the short head of the Biceps brachii, and from the intermuscular septum between the two muscles; it is inserted by means of a flat tendon into an impression at the middle of the medial surface and border of the body of the humerus between the origins of the Triceps brachii and Brachialis. It is perforated by the musculocutaneous nerve.

FIG. 413– Cross-section through the middle of upper arm. (Eycleshymer and Schoemaker. 84) (Picture From the Classic Gray's Anatomy)

Variations—A bony head may reach the medial epicondyle; a short head more rarely found may insert into the lesser tubercle. The Biceps brachii (Biceps; Biceps flexor cubiti) (Fig. 411) is a long fusiform muscle, placed on the front of the arm, and arising by two heads, from which circumstance it has received its name. The short head arises by a thick flattened tendon from the apex of the coracoid process, in common with the Coracobrachialis. The long head arises from the supraglenoid tuberosity at the upper margin of the glenoid cavity, and is continuous with the glenoidal labrum.

This tendon, enclosed in a special sheath of the synovial membrane of the shoulder-joint, arches over the head of the humerus; it emerges from the capsule through an opening close to the humeral attachment of the ligament, and descends in the intertubercular groove; it is retained in the groove by the transverse humeral ligament and by a fibrous prolongation from the tendon of the Pectoralis major. Each tendon is succeeded by an elongated muscular belly, and the two bellies, although closely applied to each other, can readily be separated until within about 7.5 cm. of the elbow-joint. Here they end in a flattened tendon, which is inserted into the rough posterior portion of the tuberosity of the radius, a bursa being interposed between the tendon and the front part of the tuberosity. 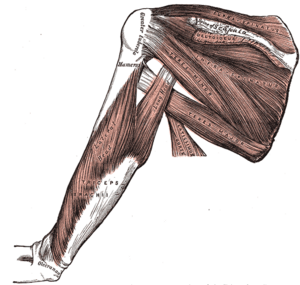 As the tendon of the muscle approaches the radius it is twisted upon itself, so that its anterior surface becomes lateral and is applied to the tuberosity of the radius at its insertion. Opposite the bend of the elbow the tendon gives off, from its medial side, a broad aponeurosis, the lacertus fibrosus (bicipital fascia) which passes obliquely downward and medialward across the brachial artery, and is continuous with the deep fascia covering the origins of the Flexor muscles of the forearm (Fig. 410).

Variations—A third head (10 per cent.) to the Biceps brachii is occasionally found, arising at the upper and medial part of the Brachialis, with the fibers of which it is continuous, and inserted into the lacertus fibrosus and medial side of the tendon of the muscle. In most cases this additional slip lies behind the brachial artery in its coarse down the arm. In some instances the third head consists of two slips, which pass down, one in front of and the other behind the artery, concealing the vessel in the lower half of the arm. More rarely a fourth head occurs arising from the outer side of the humerus, from the intertubercular groove, or from the greater tubercle. Other heads are occasionally found. Slips sometimes pass from the inner border of the muscle over the brachial artery to the medial intermuscular septum, or the medial epicondyle; more rarely to the Pronator teres or Brachialis. The long head may be absent or arise from the intertubercular groove.

The Brachialis (Brachialis anticus) (Fig. 411) covers the front of the elbow-joint and the lower half of the humerus. It arises from the lower half of the front of the humerus, commencing above at the insertion of the Deltoideus, which it embraces by two angular processes. Its origin extends below to within 2.5 cm. of the margin of the articular surface. It also arises from the intermuscular septa, but more extensively from the medial than the lateral; it is separated from the lateral below by the Brachioradialis and Extensor carpi radialis longus. Its fibers converge to a thick tendon, which is inserted into the tuberosity of the ulna and the rough depression on the anterior surface of the coronoid process. 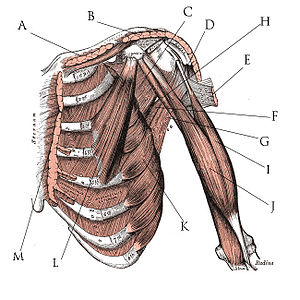 Actions—The Coracobrachialis draws the humerus forward and medialward, and at the same time assists in retaining the head of the bone in contact with the glenoid cavity. The Biceps brachii is a flexor of the elbow and, to a less extent, of the shoulder; it is also a powerful supinator, and serves to render tense the deep fascia of the forearm by means of the lacertus fibrosus given off from its tendon. The Brachialis is a flexor of the forearm, and forms an important defence to the elbow-joint. When the forearm is fixed, the Biceps brachii and Brachialis flex the arm upon the forearm, as in efforts of climbing.

The Triceps brachii (Triceps; Triceps extensor cubiti) (Fig. 412) is situated on the back of the arm, extending the entire length of the dorsal surface of the humerus. It is of large size, and arises by three heads (long, lateral, and medial), hence its name. The long head arises by a flattened tendon from the infraglenoid tuberosity of the scapula, being blended at its upper part with the capsule of the shoulder-joint; the muscular fibers pass downward between the two other heads of the muscle, and join with them in the tendon of insertion.

The lateral head arises from the posterior surface of the body of the humerus, between the insertion of the Teres minor and the upper part of the groove for the radial nerve, and from the lateral border of the humerus and the lateral intermuscular septum; the fibers from this origin converge toward the tendon of insertion. 13

Muscles of the upper extremity

The medial head arises from the posterior surface of the body of the humerus, below the groove for the radial nerve; it is narrow and pointed above, and extends from the insertion of the Teres major to within 2.5 cm. of the trochlea: it also arises from the medial border of the humerus and from the back of the whole length of the medial intermuscular septum. Some of the fibers are directed downward to the olecranon, while others converge to the tendon of insertion. 14

The tendon of the Triceps brachii begins about the middle of the muscle: it consists of two aponeurotic laminæ, one of which is subcutaneous and covers the back of the lower half of the muscle; the other is more deeply seated in the substance of the muscle. After receiving the attachment of the muscular fibers, the two lamellæ join together above the elbow, and are inserted, for the most part, into the posterior portion of the upper surface of the olecranon; a band of fibers is, however, continued downward, on the lateral side, over the Anconæus, to blend with the deep fascia of the forearm. 15

Variations—A fourth head from the inner part of the humerus; a slip between Triceps and Latissimus dorsi corresponding to the Dorso-epitrochlearis 17

The Subanconæus is the name given to a few fibers which spring from the deep surface of the lower part of the Triceps brachii, and are inserted into the posterior ligament and synovial membrane of the elbow-joint. 18

Nerves—The Triceps brachii is supplied by the seventh and eighth cervical nerves through the radial nerve. 19

Actions—The Triceps brachii is the great extensor muscle of the forearm, and is the direct antagonist of the Biceps brachii and Brachialis. When the arm is extended, the long head of the muscle may assist the Teres major and Latissimus dorsi in drawing the humerus backward and in adducting it to the thorax. The long head supports the under part of the shoulder-joint. The Subanconæus draws up the synovial membrane of the elbow-joint during extension of the forearm. 20

Quick links: Medicine Portal | Encyclopedia‏‎‏‎ | Gray's Anatomy‏‎ | Topics‏‎ |‏‎ Diseases‏‎ | Drugs | Wellness | Obesity‏‎ | Metabolic syndrome | Weight loss*
Disclaimer: The entire contents of WIKIMD.ORG are for informational purposes only and do not render medical advice or professional services. If you have a medical emergency, you should CALL 911 immediately! Given the nature of the wiki, the information provided may not be accurate, misleading and or incorrect. Use the information on this wiki at your own risk! See full Disclaimer.
Link to this page: <a href="http://www.wikimd.org/wiki/Arm">Arm</a>