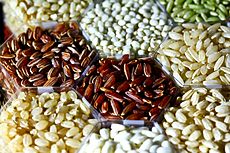 Rice can come in many shapes, colours and sizes 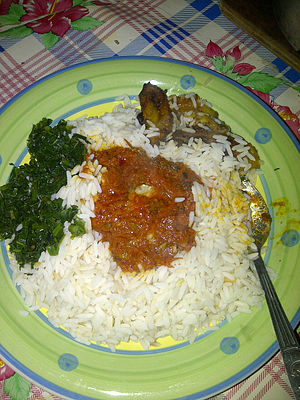 Rice (Oryza sativa) is a type of grain. In origin, it is a swamp grass. It is eaten as staple food in many parts of Asia. It is grown in warm parts of the world, mainly Asia, Africa, northern Italy, and the west coast of North America.

Rice used to be the main diet in many countries. Various kinds of food processing prepare rice for eating. It is usually cooked. In some areas, such as Spain, rice is first fried in olive oil or butter, then cooked with water or soup. In other areas, such as India, rice is eaten with sauce, curry, or soup. Rice can also be used to make alcohol, such as Japanese sake rice wine.

Rice is believed to have been first grown in ancient southern China and India around 2500 BC. Rice-growing was brought to Japan possibly in the 1st century BC, and became popular during the 2nd century and the 3rd century. From India, rice spread to southern Europe and Africa.

Alluvial loamy and clayey soil is ideal for growing rice. The rice crop needs about 24°C or above with minor variations during sowing, growing and harvesting seasons. It grows well in the areas where rainfall is above 100cm. Deltas, river valleys, coastal plains and terraced fields in mountainous regions are ideal for its cultivation.

Rice is usually planted in a flat field filled with water. Before cropping, the water is drained from the field. Before farmers developed a good farming system and fertilizers, they used to let lands rest for 1 to 2 years while farming in other lands.

In some hot areas, close to the equator, farmers do double-cropping which means raising two crops one year.

Rice contains a lot of carbohydrates. There are different ways of milling rice. Brown rice has only had the outer layer removed. It contains more fibre than the completely milled white rice.

There are several grains called "rice": they have been cultivated for thousands of years.[4] There are a huge number of varieties.

Rice can be divided into different categories on the basis of each of its major characteristics. The two subspecies of Asian rice, indica and japonica have different length and stickiness. Indica rice is long-grained and unsticky, while japonica is short-grained and sticky.[6]

For instance, over nine major varieties of rice exist for the purpose of making sake alone.[7]

A naturally occurring strain of rice, IR8, is believed to have saved many lives.[8]

"In the 1950s... you only needed to plot population growth against rice production to see that, within a few years, there would not be enough to go around. Something needed to be done, and in 1960 two American charities, the Ford and Rockefeller Foundations, joined forces to found the International Rice Research Institute (IRRI) in the Philippines.
The new team began patiently cross-breeding the 10,000 different varieties they had collected.[8]

"Most crosses between rice strains give only 1% or 2% improvements, [but] IR8 was different. It married a tall high-yielding strain from Indonesia (PETA) with a sturdy dwarf variety from China (DGWG). The results were astounding.
There was never any instance in the history of the world where rice yields doubled in one step... In fact, according to some studies, IR8 yields in best conditions could be as much as 10 times that of traditional varieties".[8]

The new strain, part of the Green Revolution, had defects. It lacked taste, and the team spent 20 years improving its quality, and its resistance to fungi and pests. The team's later work was to reduce its bad effect on diabetes type 2 and on its vitamin A content.[8]

Quick links: Medicine Portal | Encyclopedia‏‎‏‎ | Gray's Anatomy‏‎ | Topics‏‎ |‏‎ Diseases‏‎ | Drugs | Wellness | Obesity‏‎ | Metabolic syndrome | Weight loss*
Disclaimer: The entire contents of WIKIMD.ORG are for informational purposes only and do not render medical advice or professional services. If you have a medical emergency, you should CALL 911 immediately! Given the nature of the wiki, the information provided may not be accurate, misleading and or incorrect. Use the information on this wiki at your own risk! See full Disclaimer.
Link to this page: <a href="http://www.wikimd.org/wiki/Rice">Rice</a>