Respiratory system consists of the organs that carry out the process of respiration. The body needs oxygen for its metabolism without which life is incompatible.

The body cells need a continuous supply of oxygen for the metabolic processes that are necessary to maintain life through breathing of air.

The respiratory system works with the circulatory system to provide this oxygen and to remove the waste products of metabolism. It also helps to regulate pH of the blood.

Respiration is the sequence of events that results in the exchange of oxygen and carbon dioxide between the atmosphere and the body cells. Every 3 to 5 seconds, nerve impulses stimulate the breathing process, or ventilation, which moves air through a series of passages into and out of the lungs. After this, there is an exchange of gases between the lungs and the blood. This is called external respiration.

The blood transports the gases to and from the tissue cells. The exchange of gases between the blood and tissue cells is internal respiration. 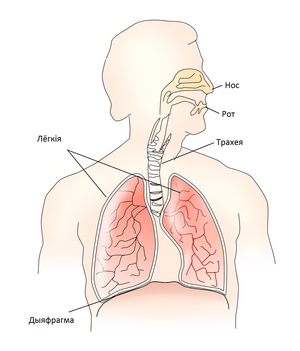 Finally, the cells utilize the oxygen for their specific activities: this is called cellular metabolism, or cellular respiration. Together, these activities constitute respiration.

The three pressures responsible for pulmonary ventilation are atmospheric pressure, intraalveolar pressure, and intrapleural pressure. Under normal conditions, the average adult takes 12 to 15 breaths a minute. A breath is one complete respiratory cycle that consists of one inspiration and one expiration. Respiratory (pulmonary) volumes are an important aspect of pulmonary function testing because they can provide information about the physical condition of the lungs.

A spirometer is used to measure respiratory volumes and capacities. These measurements provide useful information about the condition of the lungs. 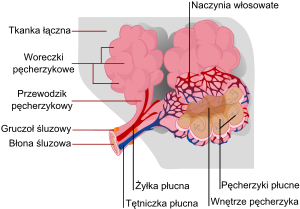 The two lungs, which contain all the components of the bronchial tree beyond the primary bronchi, occupy most of the space in the thoracic cavity. The lungs are soft and spongy because they are mostly air spaces surrounded by the alveolar cells and elastic connective tissue.

They are separated from each other by the mediastinum, which contains the heart. The only point of attachment for each lung is at the hilum, or root, on the medial side. This is where the bronchi, blood vessels, lymphatics, and nerves enter the lungs.

Anatomy of the respiratory system

partial pressure of oxygen in the alveoli (usually around 100 mmHg)

duct that extends from the terminal bronchiole to the alveolar sac

how much air is in the alveoli

(also, anatomical shunt) region of the lung that lacks proper ventilation/perfusion due to an anatomical block

(plural: bronchi) smaller branch of cartilaginous tissue that stems off of the trachea; air is funneled through the bronchi to the region where gas exchange occurs in alveoli

molecule that forms when carbon dioxide binds to hemoglobin

enzyme that catalyzes carbon dioxide and water into carbonic acid

measurement of the elasticity of the lung

area in the lung that lacks proper ventilation or perfusion

property of the lung that drives the lung tissue inward

work conducted by the intercostal muscles, chest wall, and diaphragm

(also, forced vital capacity) measure of how much air can be forced out of the lung from maximal inspiration over a specific amount of time

muscle connected to the rib cage that contracts upon inspiration

space between the layers of pleura

voice box, a short passageway connecting the pharynx and the trachea

measurement of air for one lung function (normal inhalation or exhalation)

opening of the respiratory system to the outside environment

disease (such as emphysema and asthma) that arises from obstruction of the airways; compliance increases in these diseases

curve depicting the affinity of oxygen for hemoglobin

amount of oxygen that can be transported in the blood

small particle such as dust, dirt, viral particles, and bacteria that are in the air

throat; a tube that starts in the internal nares and runs partway down the neck, where it opens into the esophagus and the larynx

(also, physiological shunt) region of the lung that lacks proper ventilation/perfusion due to a physiological change in the lung (like inflammation or edema)

(also, main bronchus) region of the airway within the lung that attaches to the trachea and bifurcates to each lung where it branches into secondary bronchi

amount of air remaining in the lung after a maximal expiration

terminal portion of the bronchiole tree that is attached to the terminal bronchioles and alveoli ducts, alveolar sacs, and alveoli

disease that arises from a deficient amount of surfactant

ratio of carbon dioxide production to each oxygen molecule consumed

number of breaths per minute

disease that results from a restriction and decreased compliance of the alveoli; respiratory distress syndrome and pulmonary fibrosis are examples

genetic disorder that affects the shape of red blood cells, and their ability to transport oxygen and move through capillaries

method to measure lung volumes and to diagnose lung diseases

region of bronchiole that attaches to the respiratory bronchioles

rare genetic disorder that results in mutation of the alpha or beta subunits of hemoglobin, creating smaller red blood cells with less hemoglobin

amount of air that is inspired and expired during normal breathing

Quick links: Medicine Portal | Encyclopedia‏‎‏‎ | Gray's Anatomy‏‎ | Topics‏‎ |‏‎ Diseases‏‎ | Drugs | Wellness | Obesity‏‎ | Metabolic syndrome | Weight loss*
Disclaimer: The entire contents of WIKIMD.ORG are for informational purposes only and do not render medical advice or professional services. If you have a medical emergency, you should CALL 911 immediately! Given the nature of the wiki, the information provided may not be accurate, misleading and or incorrect. Use the information on this wiki at your own risk! See full Disclaimer.
Link to this page: <a href="http://www.wikimd.org/wiki/Respiratory_system">Respiratory system</a>