In simplest terms, radiobiology (also known as radiation biology) is a field of clinical and basic medical sciences that involves the study of the action of ionizing radiation on living things.

Ionizing radiation is generally harmful and potentially lethal to living things but can have health benefits in radiation therapy for the treatment of cancer and thyrotoxicosis. Its most common impact is the induction of cancer with a latent period of years or decades after exposure. High doses can cause visually dramatic radiation burns, and/or rapid fatality through acute radiation syndrome. Controlled doses are used for medical imaging and radiotherapy. Some scientists suspect that low doses may have a mild hormetic effect that can improve health.[1]

Some effects of ionizing radiation on human health are stochastic, meaning that their probability of occurrence increases with dose, while the severity is independent of dose.[2] Radiation-induced cancer, teratogenesis, cognitive decline, and heart disease are all examples of stochastic effects. Other conditions such as radiation burns, acute radiation syndrome, chronic radiation syndrome, and radiation-induced thyroiditis are deterministic, meaning they reliably occur above a threshold dose, and their severity increases with dose.[2] Deterministic effects are not necessarily more or less serious than stochastic effects; either can ultimately lead to a temporary nuisance or a fatality.

Other effects include radiation-induced lung injury, cataracts, and infertility.[2]

Quantitative data on the effects of ionizing radiation on human health is relatively limited compared to other medical conditions because of the low number of cases to date, and because of the stochastic nature of some of the effects. Stochastic effects can only be measured through large epidemiological studies where enough data has been collected to remove confounding factors such as smoking habits and other lifestyle factors. The richest source of high-quality data comes from the study of Japanese atomic bomb survivors. In vitro and animal experiments are informative, but radioresistance varies greatly across species.

The consensus of the nuclear industry, regulators and governments regarding radiation health effects is expressed by the International Commission on Radiological Protection. (ICRP) Other important organizations studying the topic include

A schematic diagram showing a rectangle being irradiated by an external source (in red) of radiation (shown in yellow). 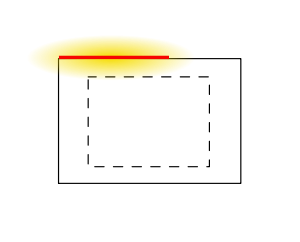 A schematic diagram showing a rectangle being irradiated by radioactive contamination (shown in red) which is present on an external surface such as the skin; this emits radiation (shown in yellow) which can enter the animal's body

External exposure is exposure which occurs when the radioactive source (or other radiation source) is outside (and remains outside) the organism which is exposed. Examples of external exposure include:

External exposure is relatively easy to estimate, and the irradiated organism does not become radioactive, except for a case where the radiation is an intense neutron beam which causes activation.

When radioactive compounds enter the human body, the effects are different from those resulting from exposure to an external radiation source. Especially in the case of alpha radiation, which normally does not penetrate the skin, the exposure can be much more damaging after ingestion or inhalation. The radiation exposure is normally expressed as a committed dose.

Although radiation was discovered in late 19th century, the dangers of radioactivity and of radiation were not immediately recognized. Acute effects of radiation were first observed in the use of X-rays when Wilhelm Röntgen intentionally subjected his fingers to X-rays in 1895. He published his observations concerning the burns that developed, though he misattributed them to ozone, a free radical produced in air by X-rays. Other free radicals produced within the body are now understood to be more important. His injuries healed later.

As a field of medical sciences, radiobiology originated from Leopold Freund's 1896 demonstration of the therapeutic treatment of a hairy mole using a new type of electromagnetic radiation called x-rays, which was discovered 1 year previously by the German physicist, Wilhelm Röntgen. After irradiating frogs and insects with X-rays in early 1896, Ivan Romanovich Tarkhanov concluded that these newly discovered rays not only photograph, but also "affect the living function".[4] At the same time, Pierre and Marie Curie discovered the radioactive polonium and radium later used to treat cancer.

The genetic effects of radiation, including the effects on cancer risk, were recognized much later. In 1927 Hermann Joseph Muller published research showing genetic effects, and in 1946 was awarded the Nobel prize for his findings.

Before the biological effects of radiation were known, many physicians and corporations had begun marketing radioactive substances as patent medicine and radioactive quackery. Examples were radium enema treatments, and radium-containing waters to be drunk as tonics. Marie Curie spoke out against this sort of treatment, warning that the effects of radiation on the human body were not well understood. Curie later died of aplastic anemia caused by radiation poisoning. Eben Byers, a famous American socialite, died of multiple cancers (but not acute radiation syndrome) in 1932 after consuming large quantities of radium over several years; his death drew public attention to dangers of radiation. By the 1930s, after a number of cases of bone necrosis and death in enthusiasts, radium-containing medical products had nearly vanished from the market.

In the United States, the experience of the so-called Radium Girls, where thousands of radium-dial painters contracted oral cancers[5] (but no cases of acute radiation syndrome[6]), popularized the warnings of occupational health associated with radiation hazards. Robley D. Evans, at MIT, developed the first standard for permissible body burden of radium, a key step in the establishment of nuclear medicine as a field of study. With the development of nuclear reactors and nuclear weapons in the 1940s, heightened scientific attention was given to the study of all manner of radiation effects.

The atomic bombings of Hiroshima and Nagasaki resulted in a large number of incidents of radiation poisoning, allowing for greater insight into its symptoms and dangers. Red Cross Hospital Surgeon, Dr. Terufumi Sasaki led intensive research into the Syndrome in the weeks and months following the Hiroshima bombings. Dr Sasaki and his team were able to monitor the effects of radiation in patients of varying proximities to the blast itself, leading to the establishment of three recorded stages of the syndrome. Within 25-30 days of the explosion, the Red Cross surgeon noticed a sharp drop in white blood cell count and established this drop, along with symptoms of fever, as prognostic standards for Acute Radiation Syndrome.[7] Actress Midori Naka, who was present during the atomic bombing of Hiroshima, was the first incident of radiation poisoning to be extensively studied. Her death on August 24, 1945 was the first death ever to be officially certified as a result of radiation poisoning (or "Atomic bomb disease").

The interactions between organisms and electromagnetic fields (EMF) and ionizing radiation can be studied in a number of ways:

The activity of biological and astronomical systems inevitably generates magnetic and electrical fields, which can be measured with sensitive instruments and which have at times been suggested as a basis for "esoteric" ideas of energy.

Radiobiology experiments typically make use of a radiation source which could be:

Quick links: Medicine Portal | Encyclopedia‏‎‏‎ | Gray's Anatomy‏‎ | Topics‏‎ |‏‎ Diseases‏‎ | Drugs | Wellness | Obesity‏‎ | Metabolic syndrome | Weight loss*
Disclaimer: The entire contents of WIKIMD.ORG are for informational purposes only and do not render medical advice or professional services. If you have a medical emergency, you should CALL 911 immediately! Given the nature of the wiki, the information provided may not be accurate, misleading and or incorrect. Use the information on this wiki at your own risk! See full Disclaimer.
Link to this page: <a href="http://www.wikimd.org/wiki/Radiobiology">Radiobiology</a>