From WikiMD
Jump to navigation Jump to search
Share
For other uses, see Pus (disambiguation).

Pus is an exudate, typically white-yellow, yellow, or yellow-brown, formed at the site of inflammation during bacterial or fungal infection.[1][2] An accumulation of pus in an enclosed tissue space is known as an abscess, whereas a visible collection of pus within or beneath the epidermis is known as a pustule, pimple, or spot.

Pus consists of a thin, protein-rich fluid, historically known as liquor puris,[3][4] and dead leukocytes from the body's immune response (mostly neutrophils).[5] During infection, macrophages release cytokines which trigger neutrophils to seek the site of infection by chemotaxis. There, the neutrophils release granules which destroy the bacteria. The bacteria resist the immune response by releasing toxins called leukocidins.[6] As the neutrophils die off from toxins and old age, they are destroyed by macrophages, forming the viscous pus.

Bacteria that cause pus are called pyogenic.[6][7]

Although pus is normally of a whitish-yellow hue, changes in the color can be observed under certain circumstances. Pus is sometimes green because of the presence of myeloperoxidase, an intensely green antibacterial protein produced by some types of white blood cells. Green, foul-smelling pus is found in certain infections of Pseudomonas aeruginosa. The greenish color is a result of the bacterial pigment pyocyanin that it produces. Amoebic abscesses of the liver produce brownish pus, which is described as looking like "anchovy paste". Pus from anaerobic infections can more often have a foul odor.[8]

In almost all cases when there is a collection of pus in the body, a clinician will try to create an opening to drain it. This principle has been distilled into the famous Latin aphorism "Ubi pus, ibi evacua" ("Where there is pus, evacuate it"). 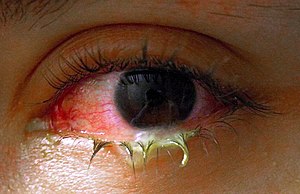 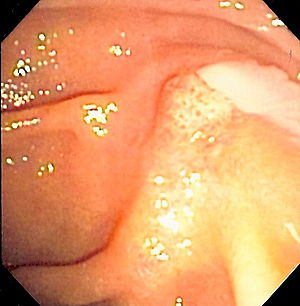 Duodenoscopy image of hepatopancreatic ampulla with pus exuding from it, indicative of cholangitis

A great many species of bacteria may be involved in the production of pus. The most commonly found include:[10]Template:MEDRS

Staphylococcus aureus bacteria is the most common cause of boils.

In the pre-asepsis era, surgeon Frederick Treves (1853–1923) wrote, "Practically all major wounds suppurated. Pus was the most common subject of converse [among surgeons], because it was the most prominent feature in the surgeon's work. It was classified according to degrees of vileness."Template:Px1Template:R But pus of the right kind was considered desirable.Template:R "If a patient was luckyTemplate:Nbsp... a thick cream-colored odorless fluid would appear within five or six days"; such "laudable" pus was considered "a sure sign that the wound would heal"Template:Px1Template:R because it meant "Nature has put up a bold fight against the invader".Template:R "On the other hand, if the pus gradually became watery, blood tinged and foul smelling, it was designated 'sanious'Template:Px1Template:R [or 'ill-conditioned'Template:Px1]Template:Px1Template:R and the wound condition was considered unfavorable".Template:R It later came to be understood that "laudable" pus generally implied an invasion of relatively benign staphylococcus, while "ill-conditioned" pus usually meant the more dangerous streptococcus was present.Template:R

Quick links: Medicine Portal | Encyclopedia‏‎‏‎ | Gray's Anatomy‏‎ | Topics‏‎ |‏‎ Diseases‏‎ | Drugs | Wellness | Obesity‏‎ | Metabolic syndrome | Weight loss*
Disclaimer: The entire contents of WIKIMD.ORG are for informational purposes only and do not render medical advice or professional services. If you have a medical emergency, you should CALL 911 immediately! Given the nature of the wiki, the information provided may not be accurate, misleading and or incorrect. Use the information on this wiki at your own risk! See full Disclaimer.
Link to this page: <a href="http://www.wikimd.org/wiki/Pus">Pus</a>