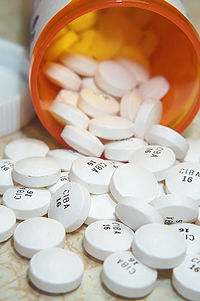 A psychiatric medication is a licensed psychoactive drug taken to exert an effect on the chemical makeup of the brain and nervous system. Thus, these medications are used to treat mental disorders. Usually prescribed in psychiatric settings, these medications are typically made of synthetic chemical compounds, although some are naturally occurring, or at least naturally derived. Since the mid-20th century, such medications have been leading treatments for a broad range of mental disorders and have decreased the need for long-term hospitalization therefore lowering the cost of mental health care.[1]

Modern psychiatric medication has advanced greatly in the past century. A number of natural remedies exist for many different psychiatric disorders. For example, many suggest that saffron is an effective alternative treatment for depression.[2] The Reuptake Hypothesis by Julius Axelrod involves the interaction among neurotransmitters, and forms the cornerstone of the development of modern psychotropic drugs.[3] His work allowed researchers to further advance their studies into the effects of psychiatric medication. Mental health medications were first introduced in the mid-20th century with the widespread introduction of chlorpromazine, an antipsychotic. The popularity of these drugs have skyrocketed since then, with millions prescribed annually.[4]

Psychiatric medications are prescription medications, requiring a prescription from a physician, such as a psychiatrist, or a psychiatric nurse practitioner, PMHNP, before they can be obtained. Some U.S. states and territories, following the creation of the prescriptive authority for psychologists movement, have granted prescriptive privileges to clinical psychologists who have undergone additional specialised education and training in medical psychology.[5] In addition to the familiar dosage in pill form, psychiatric medications are evolving into more novel methods of drug delivery. New technologies include transdermal, transmucosal, inhalation, and suppository supplements.[6]

There are six main groups of psychiatric medications.

Hallucinogens have been used in psychiatric medication in the past, and are currently being reevaluated for several uses.

Antipsychotics are drugs used to treat various symptoms of psychosis, such as those caused by psychotic disorders or schizophrenia. Atypical antipsychotics are also used as mood stabilizers in the treatment of bipolar disorder, and they can augment the action of antidepressants is major depressive disorder.[10] Antipsychotics are sometimes referred to as neuroleptic drugs and some antipsychotics are branded "major tranquilizers".

Antidepressants are drugs used to treat clinical depression, and they are also often used for anxiety and other disorders. Most antidepressants will hinder the breakdown of serotonin or norepinephrine or both. A commonly used class of antidepressants are called selective serotonin reuptake inhibitors (SSRIs), which act on serotonin transporters in the brain to increase levels of serotonin in the synaptic cleft.[10] SSRIs will often take 3–5 weeks to have a noticeable effect, as the regulation of receptors in the brain adapts. Bi-functional SSRIs are currently being researched, which will occupy the autoreceptors instead of 'throttling' serotonin .[citation needed] There are multiple classes of antidepressants which have different mechanisms of action Another type of antidepressant is a monoamine oxidase inhibitor, which is thought to block the action of Monoamine oxidase, an enzyme that breaks down serotonin and norepinephrine. MAOIs are not used as first-line treatment due to the risk of hypertensive crisis related to the consumption of foods containing the amino acid tyramine.[10]

In 1949, the Australian John Cade discovered that lithium salts could control mania, reducing the frequency and severity of manic episodes. This introduced the now popular drug lithium carbonate to the mainstream public, as well as being the first mood stabilizer to be approved by the U.S. Food & Drug Administration. Besides lithium, several anticonvulsants and atypical antipsychotics have mood stabilizing activity. The mechanism of action of mood stabilizers is not well understood.

Stimulants are some of the most widely prescribed drugs today .[citation needed] A stimulant is any drug that stimulates the central nervous system. Adderall, a collection of amphetamine salts, is one of the most prescribed pharmaceuticals in the treatment of attention-deficit hyperactivity disorder (ADHD). Stimulants can be addictive, and patients with a history of drug abuse are typically monitored closely or even barred from use and given an alternative. Discontinuing treatment without tapering the dose can cause psychological withdrawal symptoms such as anxiety and drug craving. Many stimulants are not physiologically addictive.

Benzodiazepines are effective as hypnotics, anxiolytics, anticonvulsants, myorelaxants and amnesics, but are generally recommended for short-term use.[14] They have widely supplanted barbiturates because of they have less proclivity for overdose and toxicity.

Developed in the 1950s onward, they were originally thought to be non-addictive at therapeutic doses. They are now known to cause withdrawal symptoms similar to barbiturate and alcohol withdrawal,[15] and a severe withdrawal syndrome may last for months and years in approximately 15% of users.[16]

Common benzodiazepines and derivatives include:

Quick links: Medicine Portal | Encyclopedia‏‎‏‎ | Gray's Anatomy‏‎ | Topics‏‎ |‏‎ Diseases‏‎ | Drugs | Wellness | Obesity‏‎ | Metabolic syndrome | Weight loss*
Disclaimer: The entire contents of WIKIMD.ORG are for informational purposes only and do not render medical advice or professional services. If you have a medical emergency, you should CALL 911 immediately! Given the nature of the wiki, the information provided may not be accurate, misleading and or incorrect. Use the information on this wiki at your own risk! See full Disclaimer.
Link to this page: <a href="http://www.wikimd.org/wiki/Psychiatric_medication">Psychiatric medication</a>