Overdiagnosis is the diagnosis of "disease" that will never cause symptoms or death during a patient's ordinarily expected lifetime.[1] Overdiagnosis is a side effect of screening for early forms of disease. Although screening saves lives in some cases, in others it may turn people into patients unnecessarily and may lead to treatments that do no good and perhaps do harm. Given the tremendous variability that is normal in biology, it is inherent that the more one screens, the more incidental findings will generally be found. For a large percentage of them, the most appropriate medical response is to recognize them as something that does not require intervention; but determining which action a particular finding warrants ("ignoring", watchful waiting, or intervention) can be very difficult, whether because the differential diagnosis is uncertain or because the risk ratio is uncertain (risks posed by intervention, namely, adverse events, versus risks posed by not intervening).

Overdiagnosis occurs when a disease is diagnosed correctly, but the diagnosis is irrelevant. A correct diagnosis may be irrelevant because treatment for the disease is not available, not needed, or not wanted. Some people contend that the term "overdiagnosis" is inappropriate, and that "overtreatment" is more representative of the phenomenon.

Because most people who are diagnosed are also treated, it is difficult to assess whether overdiagnosis has occurred in an individual. Overdiagnosis in an individual cannot be determined during life. Overdiagnosis is only certain when an individual remains untreated, never develops symptoms of the disease and dies of something else. Thus most of the inferences about overdiagnosis comes from the study of populations. Rapidly rising rates of testing and disease diagnosis in the setting of stable rates of the feared outcome of the disease (e.g. death) are highly suggestive of overdiagnosis. Most compelling, however, is evidence from a randomized trial of a screening test intended to detect pre-clinical disease. A persistent excess of detected disease in the tested group years after the trial is completed constitutes the best evidence that overdiagnosis has occurred.

Although overdiagnosis is potentially applicable to the diagnosis of any disease, its origin is in cancer screening – the systematic evaluation of asymptomatic patients to detect early forms of cancer.[2] The central harm of cancer screening is overdiagnosis – the detection of abnormalities that meet the pathologic definition of cancer (under the microscope) but will never progress to cause symptoms or death during a patient's ordinarily expected lifetime.

Overdiagnosis and the variability of cancer progression

Cancer screening is the effort to detect cancer early, during its pre-clinical phase — the time period that begins with an abnormal cell and ends when the patient notices symptoms from the cancer. It has long been known that some people have cancers with short pre-clinical phases (fast-growing, aggressive cancers), while others have cancers with long pre-clinical phases (slow-growing cancers). And this heterogeneity has an unfortunate implication: namely, screening tends to disproportionately detect slow-growing cancers (because they are accessible to be detected for a long period of time) and disproportionately miss the fast-growing cancers (because they are only accessible to be detected for a short period of time) – the very cancers we would most like to catch. For more information, see Screening (medicine)#Length time bias.

This long-standing model has a hidden assumption: namely, that all cancers inevitably progress. But some pre-clinical cancers will not progress to cause problems for patients. And if screening (or testing for some other reason) detects these cancers, overdiagnosis has occurred.

Cancer screening is most useful in detecting slowly progressing cancers but can cause overdiagnosis if very slow or non-progressive cancers are detected.

The arrow labeled "Fast" represents a fast-growing cancer, one that quickly leads to symptoms and to death. These are the worst forms of cancer and unfortunately often appear in the interval between screening tests. The arrow labeled "Slow" represents a slow-growing cancer, one that leads to symptoms and death but only after many years. These are the cancers for which screening has arguably the greatest beneficial impact.

The arrow labeled "Very Slow" represents a cancer that never causes problems because it is growing very slowly. If a cancer grows slowly enough, then patients will die of some other cause before the cancer gets big enough to produce symptoms. This is particularly likely with small cancers in the elderly – prostate cancer in older men serves as the most prominent clinical example.

The arrow labeled "Non-progressive" represents a cancer that never causes problems because it is not growing at all. In other words, there are cellular abnormalities that meet the pathologic definition of cancer but never grow to cause symptoms – alternatively, they may grow and then regress. Although the concept of non-progressive cancers may seem implausible, basic scientists have begun to uncover biologic mechanisms that halt the progression of cancer.[3][4][5] Some cancers outgrow their blood supply (and are starved), others are recognized by the host's immune system (and are successfully contained), and some are not that aggressive in the first place.

Overdiagnosis occurs when either "Non-progressive" cancers or "Very Slow" growing cancers (more precisely, at a slow enough pace that individuals die from something else before the cancer ever causes symptoms) are detected. These two forms of cancer are collectively referred to as pseudodisease - literally false disease. Since the word "disease" implies something that makes, or will make, a person feel sick (something that causes symptoms), pseudodisease is an appropriate word for describing these abnormalities. Thus, another definition of overdiagnosis is simply the detection of pseudodisease.

Evidence for overdiagnosis in cancer

Overdiagnosis has also been associated with early detection in a variety of other cancers, including neuroblastoma,[15][16] melanoma,[17] and thyroid cancer.[18] In fact, some degree of overdiagnosis in cancer early detection is probably the rule, not the exception[citation needed].

Evidence for overdiagnosis of infectious diseases

Issues with overdiagnosis of infectious diseases, such as malaria or typhoid fever, persist in many regions around the world. For example, malaria overdiagnosis is well-documented in African countries[19][20] and results in over-inflation of actual malaria rates reported at the local and national levels.[21] Health facilities tend to over-diagnose malaria in patients presenting with symptoms such as fever, due to traditional perceptions (for example any fever being equivalent to malaria) and issues related to laboratory testing (see Diagnosis of malaria).[22][23] Therefore, malaria overdiagnosis leads to under management of other fever-inducing conditions,[20] but also to over-prescription of antimalarial drugs.[24]

Overdiagnosed patients cannot benefit from the detection and treatment of their "cancer", because the cancer was never destined to cause symptoms or death. They can only be harmed. There are three categories of harm associated with overdiagnosis:

Overdiagnosis is often confused with the term "false positive" test results, and with misdiagnosis, but they are three distinct concepts.[26] A false positive test result refers to a test that suggests the presence of disease, but is ultimately proved to be in error (usually by a second, more precise test). Patients with false positive test results are told that they have a disease and are erroneously treated; overdiagnosed patients are told they have disease and generally receive treatment. Misdiagnosed patients do not have the condition at all, or have a totally different condition, but are treated anyway.

Overdiagnosis is also distinct from overtesting. Overtesting is the phenomenon where patients receive a medical test that they don't need; it will not benefit them.[27] For instance, a patient that receives a lumbar spine x-ray when they have low back pain without any sinister signs or symptoms (weight loss, fever or lower limb parenthesis etc) and symptoms have been present for less than 4 weeks. Most tests are subject to overtesting, but echocardiograms (ultrasounds of the heart) have been shown to be particular prone to overtesting.[27] The detection of overtesting is difficult; recently, many population-level estimates have emerged to try and detect potential overtesting. The most common of these estimates is geographical variation in test use. These estimates detect regions, hospitals or general practices that order many more tests, compared to their peers, irrespective of differences in patient demographics between regions.[28][29] Further methods that have been used to try and detect overtesting include identifying general practices that order a higher proportion of tests that return a normal result,[28] and the identification of tests with large temporal increases in their use, without a justifiable reason.[30] 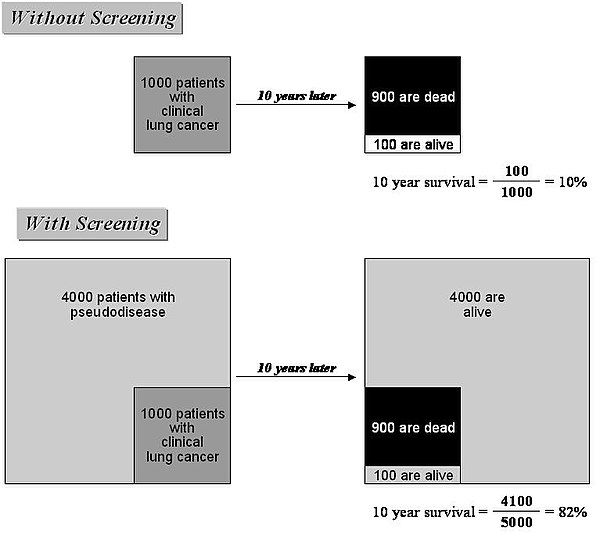 Overdiagnosis can inflate survival rates without any actual health benefits.

Imagine that there is no pseudodisease detected in current practice and that among 1000 patients diagnosed, only 100 are alive 10 years later (i.e. the 10-year survival is 100 divided by 1000 or 10%). Now imagine that in addition to identifying these cancers, spiral CT scanning also identifies 4000 patients with pseudodisease - all of whom survive 10 years, since they have non-progressive cancer. The new 10-year survival will include these patients in both the numerator and denominator - leading to a 10-year survival of 4100 divided by 5000 or 82%. Note that even though survival has changed dramatically, the number of people who die has not changed – under either condition 900 patients have died. This example demonstrates how survival rates can be increased by overdiagnosis, even if no one avoids death.

It has been proposed that some pre-malignant conditions have the words cancer or carcinoma removed from their name.[33] Another proposal is to name conditions "IDLE (indolent lesions of epithelial origin)".[33]

An analogy can be made with Neisseria meningitidis, a bacterium present in 5–15% of the adult population that can potentially cause life-threatening meningitis. To say that those who carry the microorganism "have meningitis" would be misleading.

Quick links: Medicine Portal | Encyclopedia‏‎‏‎ | Gray's Anatomy‏‎ | Topics‏‎ |‏‎ Diseases‏‎ | Drugs | Wellness | Obesity‏‎ | Metabolic syndrome | Weight loss*
Disclaimer: The entire contents of WIKIMD.ORG are for informational purposes only and do not render medical advice or professional services. If you have a medical emergency, you should CALL 911 immediately! Given the nature of the wiki, the information provided may not be accurate, misleading and or incorrect. Use the information on this wiki at your own risk! See full Disclaimer.
Link to this page: <a href="http://www.wikimd.org/wiki/Overdiagnosis">Overdiagnosis</a>