Osteopetrosis, literally "stone bone", also known as marble bone disease or Albers-Schönberg disease, is an extremely rare inherited disorder whereby the bones harden, becoming denser, in contrast to more prevalent conditions like osteoporosis, in which the bones become less dense and more brittle, or osteomalacia, in which the bones soften. Osteopetrosis can cause bones to dissolve and break.[1]

It is one of the hereditary causes of osteosclerosis.[2] It is considered to be the prototype of osteosclerosing dysplasias. The cause of the disease is understood to be malfunctioning osteoclasts, and its inability to resorb bone. Although human osteopetrosis is a heterogeneous disorder encompassing different molecular lesions and a range of clinical features, all forms share a single pathogenic nexus in the osteoclast. The exact molecular defects or location of the mutations taking place are unknown.[3] Osteopetrosis was first described in 1903, by German radiologist Albers-Schönberg.

Despite this excess bone formation, people with osteopetrosis tend to have bones that are more brittle than normal. Mild osteopetrosis may cause no symptoms, and present no problems.[4]

However, serious forms can result in...[4]

Autosomal recessive osteopetrosis (ARO), also known as malignant infantile osteopetrosis, is a rare type of skeletal dysplasia characterized by a distinct radiographic pattern of overall increased density of the bones with fundamental involvement of the medullary portion. Infantile osteopetrosis typically manifests in infancy. Diagnosis is principally based on clinical and radiographic evaluation, confirmed by gene analysis where applicable.[5] As a result of medullary canal obliteration and bony expansion, grave pancytopenia, cranial nerve compression, and pathologic fractures may ensue. The prognosis is poor if untreated. The classic radiographic features include, endobone or "bone-within-bone" appearance in the spine, pelvis and proximal femora, upper limbs, and short tubular bones of the hand. Additionally, there is the Erlenmeyer flask deformity type 2 which is characterized by absence of normal diaphysial metaphysical modeling of the distal femora with abnormal radiographic appearance of trabecular bone and alternating radiolucent metaphyseal bands.[5]

Autosomal dominant osteopetrosis (ADO) is also known as Albers-Schonberg disease. Most do not know they have this disorder because most individuals do not show any symptoms. However, the ones that do show symptoms will typically have a curvature of the spine (scoliosis), and multiple bone fractures. There are two types of adult osteopetrosis based on the basis of radiographic, biochemical, and clinical features.

The various types of osteopetrosis are caused by genetic changes (mutations) in one of at least ten genes. There is nothing a parent can do before, during or after a pregnancy to cause osteopetrosis in a child.[4]

The genes associated with osteopetrosis are involved in the development and/or function of osteoclasts, cells that break down bone tissue when old bone is being replaced by new bone (bone remodeling). This process is necessary to keep bones strong and healthy. Mutations in these genes can lead to abnormal osteoclasts, or having too few osteoclasts. If this happens, old bone cannot be broken down as new bone is formed, so bones become too dense and prone to breaking.[4]

Normal bone growth is achieved by a balance between bone formation by osteoblasts and bone resorption (breakdown of bone matrix) by osteoclasts.[9] In osteopetrosis, the number of osteoclasts may be reduced, normal, or increased. Most importantly, osteoclast dysfunction mediates the pathogenesis of this disease.[10]

Osteopetrosis is caused by underlying mutations that interfere with the acidification of the osteoclast resorption pit, for example due to a deficiency of the carbonic anhydrase enzyme encoded by the CA2 gene.[11] Carbonic anhydrase is required by osteoclasts for proton production. Without this enzyme hydrogen ion pumping is inhibited and bone resorption by osteoclasts is defective, as an acidic environment is needed to dissociate calcium hydroxyapatite from the bone matrix. As bone resorption fails while bone formation continues, excessive bone is formed.[12]

The genes associated with osteopetrosis are involved in the formation, development, and function of specialized cells called osteoclasts. These cells break down bone tissue during bone remodeling, a normal process in which old bone is removed and new bone is created to replace it. Bones are constantly being remodeled, and the process is carefully controlled to ensure that bones stay strong and healthy.[13]

Mutations in any of the genes associated with osteopetrosis lead to abnormal or missing osteoclasts. Without functional osteoclasts, old bone is not broken down as new bone is formed. As a result, bones throughout the skeleton become unusually dense. The bones are also structurally abnormal, making them prone to fracture. These problems with bone remodeling underlie all of the major features of osteopetrosis.[13] 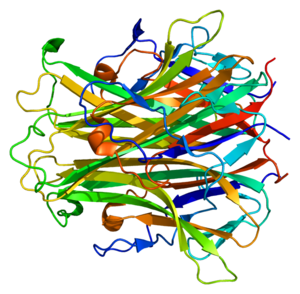 It was the 1st genetic disease treated with hematopoietic stem cell transplantation (Osteoclasts are derived from hematopoietic precursors). There is no cure, although curative therapy with bone marrow transplantion is being investigated in clinical trials. It is believed the healthy marrow will provide the sufferer with cells from which osteoclasts will develop.[4] If complications occur in children, patients can be treated with vitamin D. Gamma interferon has also been shown to be effective, and it can be associated to vitamin D. Erythropoetin has been used to treat any associated anemia. Corticosteroids may alleviate both the anemia and stimulate bone resorption. Fractures and osteomyelitis can be treated as usual.[4] Treatment for osteopetrosis depends on the specific symptoms present and the severity in each person. Therefore, treatment options must be evaluated on an individual basis. Nutritional support is important to improve growth and it also enhances responsiveness to other treatment options. A calcium-deficient diet has been beneficial for some affected people.[4]

Treatment is necessary for the infantile form:[4]

Bone marrow transplantation (BMT) improves some cases of severe, infantile osteopetrosis associated with bone marrow failure, and offers the best chance of longer-term survival for individuals with this type.[4]

In pediatric (childhood) osteopetrosis, surgery is sometimes needed because of fractures. Adult osteopetrosis typically does not require treatment, but complications of the condition may require intervention. Surgery may be needed for aesthetic or functional reasons (such as multiple fractures, deformity, and loss of function), or for severe degenerative joint disease.[4]

The long-term-outlook for people with osteopetrosis depends on the subtype and the severity of the condition in each person. The severe infantile forms of osteopetrosis are associated with shortened life expectancy, with most untreated children not surviving past their first decade. Bone marrow transplantation seems to have cured some infants with early-onset disease. However, the long-term prognosis after transplantation is unknown. For those with onset in childhood or adolescence, the effect of the condition depends on the specific symptoms (including how fragile the bones are and how much pain is present). Life expectancy in the adult-onset forms is normal.[15]

Approximately eight to 40 children are born in the United States each year with the malignant infantile type of osteopetrosis. One in every 100,000 to 500,000 individuals is born with this form of osteopetrosis. Higher rates have been found in Denmark and Costa Rica. Males and females are affected in equal numbers.[16]

The medication(s) listed below have been approved by the Food and Drug Administration (FDA) as orphan products for treatment of this condition. Learn more orphan products.

Quick links: Medicine Portal | Encyclopedia‏‎‏‎ | Gray's Anatomy‏‎ | Topics‏‎ |‏‎ Diseases‏‎ | Drugs | Wellness | Obesity‏‎ | Metabolic syndrome | Weight loss*
Disclaimer: The entire contents of WIKIMD.ORG are for informational purposes only and do not render medical advice or professional services. If you have a medical emergency, you should CALL 911 immediately! Given the nature of the wiki, the information provided may not be accurate, misleading and or incorrect. Use the information on this wiki at your own risk! See full Disclaimer.
Link to this page: <a href="http://www.wikimd.org/wiki/Osteopetrosis">Osteopetrosis</a>