Naldemedine is a peripherally acting opioid antagonist which is used to treat constipation caused by chronic opioid use. 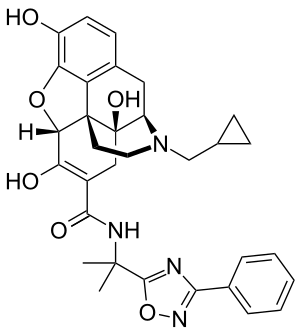 Naldemedine has not been linked to serum enzyme elevations during therapy or to clinically apparent liver injury.

Mechanism of action of Naldemedine

Naldemedine (nal dem' e deen) is a semisynthetic opiate receptor antagonist which is similar structurally to naltrexone and blocks mu receptors in the enteric nervous system of the gastrointestinal tract resulting in an inhibition of opioid induced slowing of peristalsis. Naldemedine has a large polar side chain that does not block its engagement with opioid receptors, but does prevent it from crossing the blood brain barrier. As a consequence, naldemedine reverses the peripheral but not the central nervous system effects of opiates, such as pain relief and euphoria. In large preregistration trials, naldemedine was found to increase spontaneous bowel movement frequency and reduce constipation related side effects of opiates used for analgesia in patients with chronic, non-cancer pain.

Naldemedine was approved for this use in the United States in 2017 and is currently available as tablets of 0.2 mg under the brand name Symproic.

Dosage and administration for Naldemedine

The recommended dose regimen is 0.2 mg once daily.

This WikiMD article Naldemedine is a stub.
If you are a healthcare professional familiar with the topic Naldemedine, or
A subject matter expert or authority on Naldemedine, you can help us.
About | Mission | Paid editors welcome!