NAPQI (N-acetyl-p-benzoquinone imine) is a toxic byproduct produced during the xenobiotic metabolism of the analgesic paracetamol (acetaminophen).[1] It is normally produced only in small amounts, and then almost immediately detoxified in the liver.

However, under some conditions in which NAPQI is not effectively detoxified (usually in case of paracetamol overdose), it causes severe damage to the liver. This becomes apparent after 3–4 days after ingestion and may result in death from fulminant liver failure several days after the overdose. 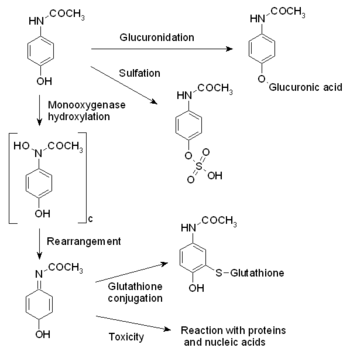 The reactions involved in paracetamol metabolism.

In adults, the primary metabolic pathway for paracetamol is glucuronidation.[1] This yields a relatively non-toxic metabolite, which is excreted into bile and passed out of the body. A small amount of the drug is metabolized via the cytochrome P-450 pathway (to be specific, CYP3A4 and CYP2E1) into NAPQI, which is extremely toxic to liver tissue, as well as being a strong biochemical oxidizer.[1] In an average adult, only a small amount (approximately 10% of a therapeutic paracetamol dose) of NAPQI is produced, which is inactivated by conjugation with glutathione. The amount of NAPQI produced differs in certain populations.[citation needed]

The dosage at which paracetamol causes toxicity usually varies between 4 g in special populations and 6 g in the average person.[citation needed] The lethal dose is usually between 10 g and 15 g.[citation needed] Concurrent alcohol intake lowers these thresholds significantly. Chronic alcoholics may be more susceptible to adverse effects due to reduced glutathione levels.[citation needed] Other populations may experience effects at lower or higher dosages depending on differences in P-450 enzyme activity and other factors which affect the amount of NAPQI produced. In general, however, the primary concern is accidental or intentional paracetamol overdose. Since the drug is available over the counter in most jurisdictions, it is a common choice for suicide attempts.[citation needed]

When a toxic dose of paracetamol is ingested, the normal glucuronide pathway is saturated and large amounts of NAPQI are produced. Liver reserves of glutathione are depleted by conjugation with this excess NAPQI. The mechanism by which toxicity results is complex, but is believed to involve reaction between unconjugated NAPQI and critical proteins as well as increased susceptibility to oxidative stress caused by the depletion of glutathione.[2]

The prognosis is good for paracetamol overdoses if treatment is initiated up to 8 hours after the drug has been taken. Most hospitals stock the antidote (acetylcysteine), which replenishes the liver's supply of glutathione, allowing the NAPQI to be metabolized safely.[1] However, what often happens is that suicidal individuals, recognizing they are still alive hours later, assume that the suicide attempt was a failure and give it little thought. After the initial overdose, there may be a period where they feel relatively normal, but have no knowledge that their liver is in the process of being destroyed. Symptoms of liver failure typically appear 16–36 hours after the initial overdose, and, by this time, nothing short of a liver transplant can be done to save their life. Without early administration of the antidote, fulminant liver failure follows, often in combination with kidney failure, and death generally occurs within several days.

The preferred antidote for NAPQI poisoning (usually secondary to paracetamol poisoning) is acetylcysteine.[1] It can be given in large amounts without side-effects. The amino acid methionine can also be used effectively as an antidote for NAPQI toxicity. These antidotes must be given within hours of the initial overdose to be useful. The antidote should be given as soon as possible, up to 8 hours post-ingestion. The sooner the antidote is administered the better the prognosis. If given within two hours of overdose, the prognosis is excellent.

Quick links: Medicine Portal | Encyclopedia‏‎‏‎ | Gray's Anatomy‏‎ | Topics‏‎ |‏‎ Diseases‏‎ | Drugs | Wellness | Obesity‏‎ | Metabolic syndrome | Weight loss*
Disclaimer: The entire contents of WIKIMD.ORG are for informational purposes only and do not render medical advice or professional services. If you have a medical emergency, you should CALL 911 immediately! Given the nature of the wiki, the information provided may not be accurate, misleading and or incorrect. Use the information on this wiki at your own risk! See full Disclaimer.
Link to this page: <a href="http://www.wikimd.org/wiki/NAPQI">NAPQI</a>