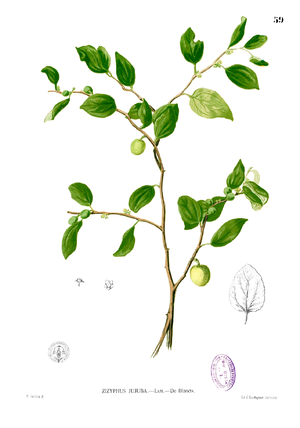 It is a small deciduous tree or shrub reaching a height of 5–12 metres (16–39 ft), usually with thorny branches. The leaves are shiny-green, ovate-acute, 2–7 centimetres (0.79–2.76 in) wide and 1–3 centimetres (0.39–1.18 in) broad, with three conspicuous veins at the base, and a finely toothed margin. The flowers are small, 5 millimetres (0.20 in) wide, with five inconspicuous yellowish-green petals. The fruit is an edible oval drupe 1.5–3 centimetres (0.59–1.18 in) deep; when immature it is smooth-green, with the consistency and taste of an apple, maturing brown to purplish-black and eventually wrinkled, looking like a small date. There is a single hard stone similar to an olive stone.[4]

Its precise natural distribution is uncertain due to extensive cultivation, but is thought to be in southern Asia, between Lebanon, Iran, Pakistan, India, Bangladesh, Nepal (called as Bayar), the Korean peninsula, and southern and central China, and also southeastern Europe though more likely introduced there.[4]

This plant has been introduced in Madagascar and grows as an invasive species in the western part of this island.

The species has a curious nomenclatural history, due to a combination of botanical naming regulations, and variations in spelling. It was first described scientifically by Carolus Linnaeus as Rhamnus zizyphus, in Species Plantarum in 1753. Later, in 1768, Philip Miller concluded it was sufficiently distinct from Rhamnus to merit separation into a new genus, in which he named it Ziziphus jujube, using Linnaeus' species name for the genus but with a probably accidental single letter spelling difference, 'i' for 'y'; for the species name he used a different name, as tautonyms (repetition of exactly the same name in the genus and species) are not permitted in botanical naming. However, because of Miller's slightly different spelling, the combination correctly using the earliest species name (from Linnaeus) with the new genus, Ziziphus zizyphus, is not a tautonym, and was therefore permitted as a botanical name; this combination was made by Hermann Karsten in 1882.[4][5] In 2006, a proposal was made to suppress the name Ziziphus zizyphus in favor of Ziziphus jujuba,[6] and this proposal was accepted in 2011.[7] Ziziphus jujuba is thus the correct scientific name for this species.

Jujube fruit is called "bor" in Marathi, "ber" in Hindi, kul in Bengali,barai in Bangladesh, ilanthappazham or badari in Malayalam, ilanthai pazham in Tamil-speaking regions, "Yelchi Hannu" (ಎಲಚಿ ಹಣ್ಣು) in Kannada and "Regi pandu" in Telugu. It is called zinzell in Malta. In Vietnamese, the fruit is called "táo tàu," which translates to "Chinese apple. " 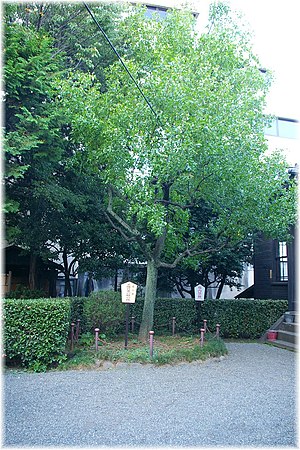 Jujube was domesticated in South Asia by 9000 BC.[8] Over 400 cultivars have been selected.

The tree tolerates a wide range of temperatures and rainfall, though it requires hot summers and sufficient water for acceptable fruiting. Unlike most of the other species in the genus, it tolerates fairly cold winters, surviving temperatures down to about −15 °C (5 °F). This enables the jujube to grow in mountain or desert habitats, provided there is access to underground water through the summer. The species Ziziphus jujuba grows in cooler regions of Asia. Five or more other species of Ziziphus are widely distributed in milder climates to hot deserts of Asia and Africa.[9]

In Madagascar, jujube trees grow everywhere in the western part of the island, from the north all the way to the south. It is widely eaten by free ranging zebus, and its seeds grow easily in zebu's feces. It is an invasive species, threatening mostly protected areas.

The freshly harvested as well as the candied dried fruits are often eaten as a snack, or with coffee. They are available in either red or black (called hóng zǎo or hēi zǎo, respectively, in Chinese), the latter being smoked to enhance their flavor.[10] In China and Korea, a sweetened tea syrup containing jujube fruits is available in glass jars, and canned jujube tea or jujube tea in the form of teabags is also available. Although not widely available, jujube juice and jujube vinegar (called 枣醋 or 红枣醋 in Chinese) are also produced; they are used for making pickles (কুলের আচার) in West Bengal and Bangladesh.

In China, a wine made from jujubes, called hong zao jiu (红枣酒) is also produced. Jujubes are sometimes preserved by storing in a jar filled with baijiu (Chinese liquor), which allows them to be kept fresh for a long time, especially through the winter. Such jujubes are called jiu zao (酒枣; literally "spirited jujube"). These fruits, often stoned, are also a significant ingredient in a wide variety of Chinese delicacies. In Korea, jujubes are called daechu (대추) and are used in Daechucha teas and samgyetang.

In Lebanon, Jordan and other Middle Eastern countries the fruit is eaten as snacks or alongside a dessert after a meal.

In Persian cuisine, the dried drupes are known as annab, while in neighboring Azerbaijan it is commonly eaten as a snack, and are known as innab. These names are clearly related, and the Turks use a similarly related name, "hünnap".Ziziphus jujuba grows in northern Pakistan and is known as Innab, commonly used in the Tibb Unani system of medicine. There seems to be quite a widespread confusion in the common name. The Innab is Z. jujuba: the local name Ber is not used for Innab. Rather Ber is used for three other cultivated or wild species i.e. Z. spina-christi, Z. mauritiana and Z. nummularia in Pakistan and parts of India and is eaten both fresh and dried. Often the dry fruit (Ber) was used as a padding in leather horse-saddles in parts of Baluchistan in Pakistan. The Arabic names Sidr is used for Ziziphus species other than Z. jujuba.

Traditionally in India, the fruits are dried in the sun and the hard nuts are removed. Then, it is pounded with tamarind, red chillies, salt, and jaggery. In some parts of the Indian state of Tamil Nadu, fresh whole ripe fruit is crushed with the above ingredients and dried under the sun to make delicious cakes called ilanthai vadai or "Regi Vadiyalu" (Telugu).[11]

In Madagascar, jujube fruits are eaten fresh or dried. People also use those fruits to make jam.

The fruits and seeds are used in Chinese and Korean traditional medicine, where they are believed to alleviate stress,[13] and traditionally for antifungal, antibacterial, antiulcer, anti-inflammatory, sedative,[14] antispastic, antifertility/contraception, hypotensive and antinephritic, cardiotonic, antioxidant, immunostimulant, and wound healing properties.[15] The jujube-based Australian drink 1-bil avoids making specific stress-related claims, but does suggest drinking 1-bil "when you feel yourself becoming distressed".[16]

A controlled clinical trial found the fruits helpful for chronic constipation.[17] In another clinical trial, Zizyphus jujuba was proved to be effective against neonatal jaundice.[18]

In Persian traditional medicine it is used in combination with other herbal medicines to treat colds, flu and coughing.[citation needed]

Ziziphin, a compound in the leaves of the jujube, suppresses the ability to perceive sweet taste.[23] The fruit, being mucilaginous, is very soothing to the throat and decoctions of jujube have often been used in pharmacy to treat sore throats.[citation needed]

The jujube's sweet smell is believed to make teenagers fall in love, and as a result, in the Himalaya and Karakoram regions, boys take a stem of sweet-smelling jujube flowers with them or put it on their hats to attract girls.[citation needed]

In the traditional Chinese wedding ceremony, the jujube was often placed in the newlyweds' bedroom as a good luck charm for fertility, along with peanuts, longan, and chestnuts, punning on an invocation to "have an honored child soon".[citation needed]

In Bhutan, the leaves are used as a potpourri to help keep homes smelling fresh and clean. It is also used to keep bugs and other insects out of the house and free of infestation.[citation needed]

In Japan, the natsume has given its name to a style of tea caddy used in the Japanese tea ceremony, due to the similar shape,[24] and also to nightlights (ナツメ球), again due to the similarity between the shape of the bulb and the fruit.[citation needed]

In Korea, the wood is used to make the body of the taepyeongso, a double-reed wind instrument. The wood is also used to make Go bowls, beads, and violin parts.[citation needed]

In Vietnam, the jujube fruit is eaten freshly picked from the tree as a snack. It is also dried and used in desserts, such as sâm bổ lượng, a cold beverage that includes the dried jujube, longan, fresh seaweed, barley, and lotus seeds.[citation needed]

A jujube honey is produced in the middle Atlas Mountains of Morocco.[citation needed]

In Madagascar, jujube trees are a good wood for charcoal, the second main source of cooking energy.[citation needed]

Witch's brooms, prevalent in China and Korea, is the main disease affecting jujubes, though plantings in North America currently are not affected by any pests or diseases.[25]

Quick links: Medicine Portal | Encyclopedia‏‎‏‎ | Gray's Anatomy‏‎ | Topics‏‎ |‏‎ Diseases‏‎ | Drugs | Wellness | Obesity‏‎ | Metabolic syndrome | Weight loss*
Disclaimer: The entire contents of WIKIMD.ORG are for informational purposes only and do not render medical advice or professional services. If you have a medical emergency, you should CALL 911 immediately! Given the nature of the wiki, the information provided may not be accurate, misleading and or incorrect. Use the information on this wiki at your own risk! See full Disclaimer.
Link to this page: <a href="http://www.wikimd.org/wiki/Jujube">Jujube</a>