Jaundice (also called icterus) is when the skin and the whites of the eyes become a yellow color.[1] People with jaundice have a problem with their liver, which stops it from removing dead red blood cells properly. These blood cells contain a chemical called bilirubin.[1] Bilirubin causes the yellow coloring of the skin. Jaundice is common in newly born babies. It usually starts the second day after birth.[2]

Jaundice can also be caused by other diseases, like malaria, hepatitis, or gallstones.

Jaundice is the most common of all liver problems. The yellow colour of the skin and mucous membranes happens because of an increase in the bile pigment, bilirubin, in the blood.[2]

The bile, made by the liver, is a vital digestive fluid needed for proper nutrition. It also stops decaying changes in food. If the bile is stopped from entering the intestines there is an increase in gases and other products. Normally, the production of bile and its flow is constant.

There are three types of jaundice:

Yellow discoloration of the skin and the whites of the eyes happens in all types of jaundice. 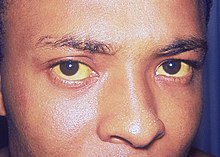 The symptoms of jaundice are:[3]

Other causes of jaundice are pernicious anaemia and diseases affecting the liver such as typhoid, malaria, yellow fever and tuberculosis.

Quick links: Medicine Portal | Encyclopedia‏‎‏‎ | Gray's Anatomy‏‎ | Topics‏‎ |‏‎ Diseases‏‎ | Drugs | Wellness | Obesity‏‎ | Metabolic syndrome | Weight loss*
Disclaimer: The entire contents of WIKIMD.ORG are for informational purposes only and do not render medical advice or professional services. If you have a medical emergency, you should CALL 911 immediately! Given the nature of the wiki, the information provided may not be accurate, misleading and or incorrect. Use the information on this wiki at your own risk! See full Disclaimer.
Link to this page: <a href="http://www.wikimd.org/wiki/Jaundice">Jaundice</a>