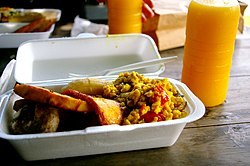 Ital or I-tal ( EYE-tahl) is food often celebrated by those in the Rastafari movement. It is compulsory in the Nyabinghi mansion though not in the Twelve Tribes of Israel or Remi mansions. The word derives from the English word "vital", with the initial syllable replaced by i.[1] This is done to many words in the Rastafari vocabulary to signify the unity of the speaker with all of nature. Rastafari derive their beliefs and morality from intense personal meditations and prayer, and therefore there is no single dogma of Rastafari belief.[2] Due to this emphasis on individual personal meditation in Rastafari, the expression of Ital eating varies widely from Rasta to Rasta, and there are few universal "rules" of Ital living.

The primary goal of adhering to an Ital diet is to increase Livity, or the life energy that Rastafari generally believe lives within all human beings, as conferred from the Almighty.[3] A common tenet of Rastafari beliefs is the sharing of a central Livity among living things, and what is put into one's body should enhance Livity rather than reduce it. Though there are different interpretations of ital regarding specific foods, the general principle is that food should be natural, or pure, and from the earth; Rastafari therefore often avoid food which is chemically modified or contains artificial additives (e.g., colour, flavourings, and preservatives). Some also avoid added salt in foods, especially salt with the artificial addition of iodine, while pure sea or kosher salt is eaten by some. In strict interpretations, foods that have been produced using chemicals such as pesticides and fertilizer are not considered ital.[4] Early adherents adopted their dietary laws based on their interpretation of several books of the Bible, including the Book of Genesis ("Then God said, "I give you every Seed-bearing plant on the face of the whole earth and every tree that has fruit with seed in it. They will be yours for food." (Genesis 1:29), the books of Leviticus and Deuteronomy.

Many expressions of the I-tal diet include adherence to a strict vegetarian diet. This is based in part on the belief that since meat is dead, eating it would therefore work against Livity elevation. It is also practiced because as strict adherents to natural living, Rastafari often believe the human being is a natural vegetarian based on human physiology and anatomy. Many adherents to Ital diets are strict vegans, as they do not consider dairy to be natural for human consumption either. However, consumption of fish, particularly those less than 13 inches in length, is sometimes practiced within Rastafari Ital diets. In addition, in common with religions such as Judaism, Islam, Ethiopian Christianity, and Seventh-day Adventists most Rastafari avoid the eating of pork. Some Rastafari also avoid eating shellfish because, in common with pigs, shellfish are considered scavengers.[5]

The most strict interpretations also avoid the consumption of rock salt (sea salt can be substituted), and food that has been preserved by canning or drying, and even prohibit the use of metal cooking utensils. In this case, only clay and wood cooking pots, crockery, and cutlery are used. Few adherents of ital follow the strictest interpretation; some Rastafari do not adhere to them at all.

Due to its roots in Jamaica and the deleterious effects alcohol has had on Jamaican society, many Rastafari do not approve of alcohol consumption.[6] However, many Rastafari, especially those in the United States and Europe, do drink alcohol on occasion as long as it does not reach a level that clouds the mind or reduces their livity. Many Rastafari disapprove of cigarettes due to the serious health concerns associated with their use, and many Rastafari avoid coffee and other caffeinated beverages, though this is less common. In fact some Rastas grow their own coffee, sugar, and chocolate.

Quick links: Medicine Portal | Encyclopedia‏‎‏‎ | Gray's Anatomy‏‎ | Topics‏‎ |‏‎ Diseases‏‎ | Drugs | Wellness | Obesity‏‎ | Metabolic syndrome | Weight loss*
Disclaimer: The entire contents of WIKIMD.ORG are for informational purposes only and do not render medical advice or professional services. If you have a medical emergency, you should CALL 911 immediately! Given the nature of the wiki, the information provided may not be accurate, misleading and or incorrect. Use the information on this wiki at your own risk! See full Disclaimer.
Link to this page: <a href="http://www.wikimd.org/wiki/Ital">Ital</a>