grapefruit interacts with the effects of some drugs

Grapefruit and grapefruit juice have been found to interact with numerous drugs (at least 85 by the latest[when?] count), in many cases resulting in adverse effects.[1] Organic compounds that are furanocoumarin derivatives interfere with the hepatic and intestinal enzyme cytochrome P450 isoform CYP3A4 and are believed to be primarily responsible for the effects of grapefruit on the enzyme. Bioactive compounds in grapefruit juice may also interfere with P-glycoprotein and organic anion transporting polypeptides (OATPs), either increasing or decreasing the bioavailability of a number of drugs. Pomelo (the Asian fruit which was crossed with an orange to produce grapefruit) also contains high amounts of furanocoumarin derivatives. Some grapefruit-pomelo hybrids have practically no furanocoumarin content, and one is a commercially viable seedless type.[2]

This list is incomplete; you can help by expanding it.

The following drugs are affected by CYP3A4 inhibition with grapefruit compounds: 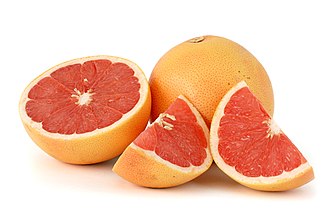 List of Amphetamines That Interact With The Cytochrome P450 CYP2D6 enzyme:

Research has been done on the interaction between amphetamines and The Cytochrome P450 CYP2D6 enzyme, and researchers concluded that some parts of substrate molecules contribute to the binding of the enzyme.[11]

Additional drugs found to be affected by grapefruit juice include, but are not limited to:

Mechanism of the interaction

The CYP3A4 isoform of cytochrome P450 is located in both the liver and the enterocytes. Many oral drugs undergo first-pass (presystemic) metabolism by the enzyme. Several organic compounds found in grapefruit and specifically in grapefruit juice exert inhibitory action on drug metabolism by the enzyme. It has been established that a group of compounds called furanocoumarins are responsible for this interaction, and not flavonoids as was previously reported.[32] The list of active furanocoumarins found in grapefruit juice includes: bergamottin, bergapten, bergaptol and 6',7'-dihydroxybergamottin.

This interaction is particularly dangerous when the drug in question has a low therapeutic index, so that a small increase in blood concentration can be the difference between therapeutic effect and toxicity. Grapefruit juice inhibits the enzyme only within the intestines if consumed in low amounts. Intestinal enzyme inhibition will only affect the potency of orally administrated drugs. When larger amounts of grapefruit are consumed it may also inhibit the enzyme in the liver. The hepatic enzyme inhibition may cause an additional increase in potency and a prolonged metabolic half-life (prolonged metabolic half-life for all ways of drug administration).[33] The degree of the effect varies widely between individuals and between samples of juice, and therefore cannot be accounted for a priori.

Another mechanism of interaction is possibly through the P-glycoprotein (Pgp) that is localized in the apical brush border of the enterocytes. Pgp transports lipophilic molecules out of the enterocyte back into the intestinal lumen. Drugs that possess lipophilic properties are either metabolised by CYP3A4 or removed into the intestine by the Pgp transporter. Both the Pgp and CYP3A4 may act synergistically as a barrier to many orally administered drugs. Therefore, their inhibition (both or alone) can markedly increase the bioavailability of a drug.

The interaction caused by grapefruit compounds lasts for up to 72 hours, and its effect is the greatest when the juice is ingested with the drug or up to 4 hours before the drug. [34][35][36]

I would most definitely recommend to go to here. They are very nice helpful and know what they are doing and talking about, I can see that the doctor has experience for sure. - A patient. Portions of content adapted from Wikipedia's article on Grapefruit–drug interactions which is released under the CC BY-SA 3.0.