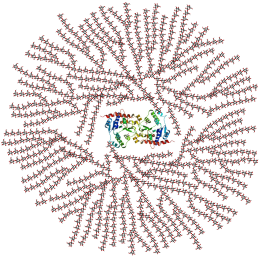 Schematic two-dimensional cross-sectional view of glycogen: A core protein of glycogenin is surrounded by branches of glucose units. The entire globular granule may contain around 30,000 glucose units.[1]

A view of the atomic structure of a single branched strand of glucose units in a glycogen molecule. 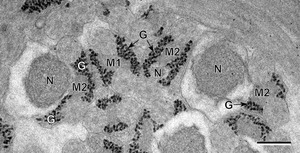 In humans, glycogen is made and stored primarily in the cells of the liver and the muscles, and functions as the secondary long-term energy storage (with the primary energy stores being fats held in adipose tissue). Muscle glycogen is converted into glucose by muscle cells, and liver glycogen converts to glucose for use throughout the body including the central nervous system.

Glycogen is the analogue of starch, a glucose polymer and energy storage in plants, having a similar structure to amylopectin (a component of starch), but more extensively branched and compact than starch. Glycogen is found in the form of granules in the cytosol/cytoplasm in many cell types, and plays an important role in the glucose cycle. Glycogen forms an energy reserve that can be quickly mobilized to meet a sudden need for glucose, but one that is less compact than the energy reserves of triglycerides (lipids).

In the liver cells (hepatocytes), glycogen can compose up to 8% of its fresh weight (100–120 g in an adult) soon after a meal.[3] Only the glycogen stored in the liver can be made accessible to other organs. In the muscles, glycogen is found in a low concentration (1-2% of the muscle mass). The amount of glycogen stored in the body—especially within the muscles, liver, and red blood cells[4][5][6]—mostly depends on physical training, basal metabolic rate, and eating habits such as intermittent fasting[citation needed]. Small amounts of glycogen are found in the kidneys, and even smaller amounts in certain glial cells in the brain and white blood cells. The uterus also stores glycogen during pregnancy to nourish the embryo.[7]

1,4-α-glycosidic linkages in the glycogen oligomer

1,4-α-glycosidic and 1,6-glycosidic linkages in the glycogen oligomer

Glycogen is a branched biopolymer consisting of linear chains of glucose residues with further chains branching off every 10 glucoses or so. Glucoses are linked together linearly by α(1→4) glycosidic bonds from one glucose to the next. Branches are linked to the chains from which they are branching off by α(1→6) glycosidic bonds between the first glucose of the new branch and a glucose on the stem chain.[8]

Due to the way glycogen is synthesised, every glycogen granule has at its core a glycogenin protein.[9]

As a meal containing carbohydrates is eaten and digested, blood glucose levels rise, and the pancreas secretes insulin. Blood glucose from the portal vein enters liver cells (hepatocytes). Insulin acts on the hepatocytes to stimulate the action of several enzymes, including glycogen synthase. Glucose molecules are added to the chains of glycogen as long as both insulin and glucose remain plentiful. In this postprandial or "fed" state, the liver takes in more glucose from the blood than it releases.

After a meal has been digested and glucose levels begin to fall, insulin secretion is reduced, and glycogen synthesis stops. When it is needed for energy, glycogen is broken down and converted again to glucose. Glycogen phosphorylase is the primary enzyme of glycogen breakdown. For the next 8–12 hours, glucose derived from liver glycogen is the primary source of blood glucose used by the rest of the body for fuel.

Glucagon, another hormone produced by the pancreas, in many respects serves as a countersignal to insulin. In response to insulin levels being above normal (when blood levels of glucose begin to fall below the normal range), glucagon is secreted in increasing amounts and stimulates both glycogenolysis (the breakdown of glycogen) and gluconeogenesis.

Muscle cell glycogen appears to function as an immediate reserve source of available glucose for muscle cells. Other cells that contain small amounts use it locally, as well. As muscle cells lack glucose-6-phosphatase, which is required to pass glucose into the blood, the glycogen they store is available solely for internal use and is not shared with other cells. This is in contrast to liver cells, which, on demand, readily do break down their stored glycogen into glucose and send it through the blood stream as fuel for other organs. Glycogen is also a suitable storage substance due to its insolubility in water, which means it does not affect the osmotic pressure of a cell.

Glycogen synthesis is, unlike its breakdown, endergonic - requires the input of energy. Energy for glycogen synthesis comes from UTP, which reacts with glucose-1-phosphate, forming UDP-glucose, in a reaction catalysed by UDP-glucose pyrophosphorylase. Glycogen is synthesized from monomers of UDP-glucose by the enzyme glycogen synthase, which progressively lengthens the glycogen chain with (α1→4) bonded glucose. As glycogen synthase can lengthen only an existing chain, the protein glycogenin is needed to initiate the synthesis of glycogen. The glycogen-branching enzyme, amylo (α1→4) to (α1→6) transglycosylase, catalyzes the transfer of a terminal fragment of six or seven glucose residues from a nonreducing end to the C-6 hydroxyl group of a glucose residue deeper into the interior of the glycogen molecule. The branching enzyme can act upon only a branch having at least 11 residues, and the enzyme may transfer to the same glucose chain or adjacent glucose chains.

Action of glycogen phosphorylase on glycogen

Glycogen is cleaved from the nonreducing ends of the chain by the enzyme glycogen phosphorylase to produce monomers of glucose-1-phosphate, which is then converted to glucose 6-phosphate by phosphoglucomutase. A special debranching enzyme is needed to remove the α(1-6) branches in branched glycogen and reshape the chain into linear polymer. The G6P monomers produced have three possible fates:

In hypoglycemia caused by excessive insulin, liver glycogen levels are high, but the high insulin levels prevent the glycogenolysis necessary to maintain normal blood sugar levels. Glucagon is a common treatment for this type of hypoglycemia.

Various inborn errors of metabolism are caused by deficiencies of enzymes necessary for glycogen synthesis or breakdown. These are collectively referred to as glycogen storage diseases.

Long-distance athletes, such as marathon runners, cross-country skiers, and cyclists, often experience glycogen depletion, where almost all of the athlete's glycogen stores are depleted after long periods of exertion without enough energy consumption. This phenomenon is referred to as "hitting the wall".

Glycogen depletion can be forestalled in three possible ways. First, during exercise, carbohydrates with the highest possible rate of conversion to blood glucose (high glycemic index) are ingested continuously. The best possible outcome of this strategy replaces about 35% of glucose consumed at heart rates above about 80% of maximum. Second, through endurance training adaptations and specialized regimens (e.g. fasted low-intensity endurance training), the body can condition type I muscle fibers to improve both fuel use efficiency and workload capacity to increase the percentage of fatty acids used as fuel,[11][12][citation needed] sparing carbohydrate use from all sources. Third, by consuming large quantities of carbohydrates after depleting glycogen stores as a result of exercise or diet, the body can increase storage capacity of intramuscular glycogen stores.[13][14][15] This process is known as carbohydrate loading. In general, glycemic index of carbohydrate source does not matter since muscular insulin sensitivity is increased as a result of temporary glycogen depletion.[16][17]

When experiencing glycogen debt, athletes often experience extreme fatigue to the point that it is difficult to move. As a reference, the very best professional cyclists in the world will usually finish a 4- to 5-hr stage race right at the limit of glycogen depletion using the first three strategies.

Quick links: Medicine Portal | Encyclopedia‏‎‏‎ | Gray's Anatomy‏‎ | Topics‏‎ |‏‎ Diseases‏‎ | Drugs | Wellness | Obesity‏‎ | Metabolic syndrome | Weight loss*
Disclaimer: The entire contents of WIKIMD.ORG are for informational purposes only and do not render medical advice or professional services. If you have a medical emergency, you should CALL 911 immediately! Given the nature of the wiki, the information provided may not be accurate, misleading and or incorrect. Use the information on this wiki at your own risk! See full Disclaimer.
Link to this page: <a href="http://www.wikimd.org/wiki/Glycogen">Glycogen</a>