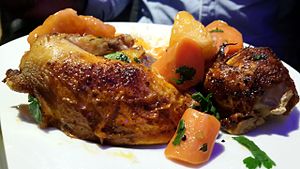 African recipes made up of fried chicken 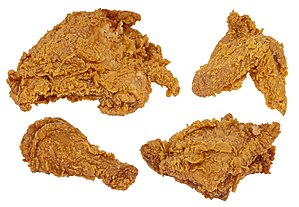 Fried chicken consists of pieces of chicken that have been either battered or floured and then pan fried, pressure fried or deep fried. The breading adds a crisper crust to chickens' exterior. The chicken is cut at the joints with the bones and skin being left intact. Some fast food restaurant chains serve fried chicken, most notably Kentucky Fried Chicken, Popeyes and Church's Chicken.

Fried chicken is usually stereotypically associated with black people but anybody can eat it. There have been a number of public controversies about remarks that people have made about fried chicken and black people that have been considered racist.

The term fried chicken was first used in the 1830s.

Scottish people were the first European people who were frying chicken, although it was not seasoned or battered. People in West Africa were the ones who seasoned it.[1][2] However, the first dish which was deep fried was fritters. Fritters were popular during the Middle Ages.

Quick links: Medicine Portal | Encyclopedia‏‎‏‎ | Gray's Anatomy‏‎ | Topics‏‎ |‏‎ Diseases‏‎ | Drugs | Wellness | Obesity‏‎ | Metabolic syndrome | Weight loss*
Disclaimer: The entire contents of WIKIMD.ORG are for informational purposes only and do not render medical advice or professional services. If you have a medical emergency, you should CALL 911 immediately! Given the nature of the wiki, the information provided may not be accurate, misleading and or incorrect. Use the information on this wiki at your own risk! See full Disclaimer.
Link to this page: <a href="http://www.wikimd.org/wiki/Fried_chicken">Fried chicken</a>