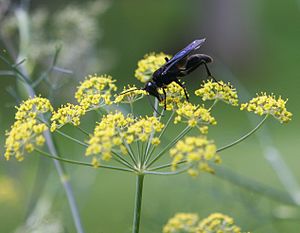 Fennel seeds are ground and used as a spice or as an ingredient of a spice mixture;  Fennel can also refer to the fennel leaves used for seasoning which are aromatic bulbous stem base eaten cooked or raw in salads; It can refer to any of several aromatic herbs having edible seeds and leaves and stems. 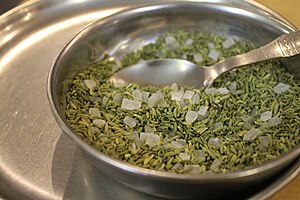 Join us: This article is a stub. Help improve Fennel or others. Do not trust amateurs with your life! Join us in this effort!. Paid editors welcome.

Quick links: Medicine Portal | Encyclopedia‏‎‏‎ | Gray's Anatomy‏‎ | Topics‏‎ |‏‎ Diseases‏‎ | Drugs | Wellness | Obesity‏‎ | Metabolic syndrome | Weight loss*
Disclaimer: The entire contents of WIKIMD.ORG are for informational purposes only and do not render medical advice or professional services. If you have a medical emergency, you should CALL 911 immediately! Given the nature of the wiki, the information provided may not be accurate, misleading and or incorrect. Use the information on this wiki at your own risk! See full Disclaimer.
Link to this page: <a href="http://www.wikimd.org/wiki/Fennel">Fennel</a>