Encephalitis is inflammation of the brain.[1] The severity can be variable with symptoms including headache, fever, confusion, a stiff neck, and vomiting.[2] Complications may include seizures, hallucinations, trouble speaking, memory problems, and problems with hearing.[2]

Causes of encephalitis include viruses such as herpes simplex virus and rabies as well as bacteria, fungi, or parasites.[2][3] Other causes include autoimmune diseases and certain medications.[3] In many cases the cause remains unknown.[3] Risk factors include a weak immune system.[3] Diagnosis is typically based on symptoms and supported by blood tests, medical imaging, and analysis of cerebrospinal fluid.[3]

Certain types are preventable with vaccines.[1] Treatment may include antiviral medications (such as acyclovir), anticonvulsants, and corticosteroids.[2] Treatment generally takes place in hospital.[2] Some people require artificial respiration.[2] Once the immediate problem is under control, rehabilitation may be required.[3] In 2015, encephalitis was estimated to have affected 4.3 million people and resulted in 150,000 deaths worldwide.[4][5]

Adults with encephalitis present with acute onset of fever, headache, confusion, and sometimes seizures. Younger children or infants may present with irritability, poor appetite and fever.[6] Neurological examinations usually reveal a drowsy or confused person. Stiff neck, due to the irritation of the meninges covering the brain, indicates that the patient has either meningitis or meningoencephalitis.[7]

It can be caused by a bacterial infection, such as bacterial meningitis,[13] or may be a complication of a current infectious disease syphilis (secondary encephalitis).[14]

Other bacterial pathogens, like Mycoplasma and those causing rickettsial disease, cause inflammation of the meninges and consequently encephalitis. A non-infectious cause includes acute disseminated encephalitis which is demyelinated.[15]

Limbic encephalitis refers to inflammatory disease confined to the limbic system of the brain. The clinical presentation often includes disorientation, disinhibition, memory loss, seizures, and behavioral anomalies. MRI imaging reveals T2 hyperintensity in the structures of the medial temporal lobes, and in some cases, other limbic structures. Some cases of limbic encephalitis are of autoimmune origin.[16] 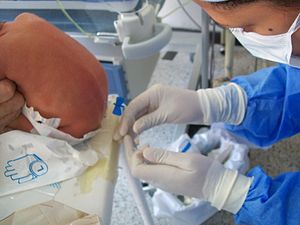 Spinal tap on a newborn

People should only be diagnosed with encephalitis if they have a decreased or altered level of consciousness, lethargy, or personality change for at least twenty-four hours without any other explainable cause.[20] Diagnosing encephalitis is done via a variety of tests:[21]

Vaccination is available against tick-borne[23] and Japanese encephalitis[24] and should be considered for at-risk individuals. Post-infectious encephalomyelitis complicating smallpox vaccination is avoidable, for all intents and purposes, as smallpox is nearly eradicated.[25] Contraindication to Pertussis immunization should be observed in patients with encephalitis.[26]

Treatment (which is based on supportive care) is as follows:[27]

Pyrimethamine-based maintenance therapy is often used to treat Toxoplasmic Encephalitis (TE), which is caused by Toxoplasma gondii and can be life-threatening for people with weak immune systems.[28] The use of highly active antiretroviral therapy (HAART), in conjunction with the established pyrimethamine-based maintenance therapy, decreases the chance of relapse in patients with HIV and TE from approximately 18% to 11%.[28] This is a significant difference as relapse may impact the severity and prognosis of disease and result in an increase in healthcare expenditure.[28]

Identification of poor prognostic factors include cerebral edema, status epilepticus, and thrombocytopenia.[30] In contrast, a normal encephalogram at the early stages of diagnosis is associated with high rates of survival.[30]

The word is from Ancient Greek ἐγκέφαλος, enképhalos "brain",[33] composed of ἐν, en, "in" and κεφαλή, kephalé, "head", and the medical suffix -itis "inflammation".[34]

‹ The template below (Inflammation) is being considered for . See templates for discussion to help reach a consensus. ›

Quick links: Medicine Portal | Encyclopedia‏‎‏‎ | Gray's Anatomy‏‎ | Topics‏‎ |‏‎ Diseases‏‎ | Drugs | Wellness | Obesity‏‎ | Metabolic syndrome | Weight loss*
Disclaimer: The entire contents of WIKIMD.ORG are for informational purposes only and do not render medical advice or professional services. If you have a medical emergency, you should CALL 911 immediately! Given the nature of the wiki, the information provided may not be accurate, misleading and or incorrect. Use the information on this wiki at your own risk! See full Disclaimer.
Link to this page: <a href="http://www.wikimd.org/wiki/Encephalitis">Encephalitis</a>