Dubowitz syndrome is a rare genetic disorder characterized by microcephaly, stunted growth, and a receding chin. Symptoms vary among patients, but other characteristics include a soft, high-pitched voice, partial webbing of the fingers and toes, palate deformations, genital abnormalities, language difficulties, and an aversion to crowds.[2] The pathogenesis of the disease is yet to be identified, and no medical tests can definitively diagnose the disease.[3] The primary method of diagnosis is to identify facial phenotypes. Since it was first described in 1965 by English physician Victor Dubowitz, over 140 cases have been reported worldwide. Although the majority of cases have been reported from the United States, Germany, and Russia, the disorder appears to affect both genders and all ethnicities equally.[2]

Microcephaly is a characteristic in which the circumference of the head is smaller than normal due to improper development of the brain. It is caused by genetic disorders, infections, radiation, medications or alcohol abuse during pregnancy. Defects in the growth of the cerebral cortex lead to many of the features associated with microcephaly.[4] 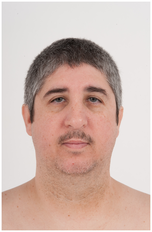 Although the pathology of Dubowitz syndrome is unknown, it is a heritable autosomal recessive disorder. Parents of people with Dubowitz syndrome are sometimes related, and there have been several cases of it occurring in monozygotic twins, siblings, and cousins.[5] There is great variability in symptoms between cases, especially in intelligence.[6] Although there is much evidence that Dubowitz syndrome is genetic, the symptoms are similar to fetal alcohol syndrome. Further studies are needed to determine whether alcohol influences whether Dubowitz syndrome manifests in people who are genetically vulnerable.[7] Breakdown of chromosomes is known to occur.[5]

The pathology of Dubowitz syndrome is still unclear because of its rarity and the wide array of associated symptoms. Several studies have focused on different aspects of the disorder to try to find its exact cause and expression. One study examined the specific oral features in one patient.[11] Another found abnormalities in the brain, such as corpus callosum dysgenesis, an underdeveloped anterior pituitary and a brain stalk with an ectopic (misplaced) posterior pituitary.[12]

There is no definitive test available for this condition. The diagnosis is based on the constellation of typical clinical features.

There is currently no specific treatment for this condition. Management is supportive.

In particular there is currently no known method of correcting microcephaly. However, there are a variety of symptomatic treatments that help to counter some of its adverse effects, such as speech and occupational therapies, as well as medication to control seizures and hyperactivity.[13]

This condition was first reported in 1965.

Quick links: Medicine Portal | Encyclopedia‏‎‏‎ | Gray's Anatomy‏‎ | Topics‏‎ |‏‎ Diseases‏‎ | Drugs | Wellness | Obesity‏‎ | Metabolic syndrome | Weight loss*
Disclaimer: The entire contents of WIKIMD.ORG are for informational purposes only and do not render medical advice or professional services. If you have a medical emergency, you should CALL 911 immediately! Given the nature of the wiki, the information provided may not be accurate, misleading and or incorrect. Use the information on this wiki at your own risk! See full Disclaimer.
Link to this page: <a href="http://www.wikimd.org/wiki/Dubowitz_syndrome">Dubowitz syndrome</a>