The act of drinking portrayed in statuary—the figure employs a traditional waterskin.

Drinking is the act of ingesting water or other liquids into the body through the mouth. Water is required for many of life’s physiological processes. Both excessive and inadequate water intake are associated with health problems. 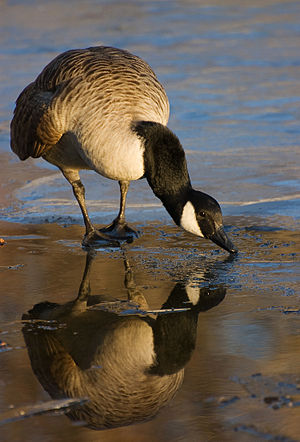 A Canada goose pulling water into its bill

When a liquid is poured into an open human mouth, the swallowing process is completed by peristalsis which delivers the liquid to the stomach; much of the activity is abetted by gravity. The liquid may be poured from the hands or drinkware may be used as vessels. Drinking can also be performed by acts of inhalation, typically when imbibing hot liquids or drinking from a spoon. Infants employ a method of suction wherein the lips are pressed tight around a source, as in breastfeeding: a combination of breath and tongue movement creates a vacuum which draws in liquid.[1]

Amphibians and aquatic animals which live in freshwater do not need to drink: they absorb water steadily through the skin by osmosis.[2][3] Saltwater fish, however, drink through the mouth as they swim, and purge the excess salt through the gills.[3]

By necessity, terrestrial animals in captivity become accustomed to drinking water, but most free-roaming animals stay hydrated through the fluids and moisture in fresh food.[4] When conditions impel them to drink from bodies of water, the methods and motions differ greatly among species.[2]

Cats, canines, and ruminants all lower the neck and lap in water with their powerful tongues.[2] Cats and canines lap up water with the tongue in a spoon-like shape.[5] Ruminants and most other herbivores partially submerge the tip of the mouth in order to draw in water by means of a plunging action with the tongue held straight.[6] Cats drink at a significantly slower pace than ruminants, who face greater natural predation hazards.[2]

Most birds scoop or draw water into the buccal areas of their bills, raising and tilting their heads back to drink (an exception is the common pigeon which can suck in water directly by inhalation).[2] Many desert animals do not drink even if water becomes available, but rely on eating succulent plants.[2] Uniquely, elephants draw water into their trunks and squirt it into their mouths[2] 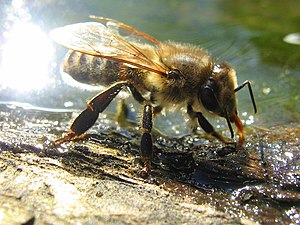 Drinking can be observed in many insect species.[2]
Main articles: Tissue hydration and Dehydration

Like nearly all other life forms, humans require water for tissue hydration. Lack of hydration causes thirst, a desire to drink which is regulated by the hypothalamus in response to subtle changes in the body's electrolyte levels and blood volume. A decline in total body water is called dehydration and will eventually lead to death by hypernatremia. Methods used in the management of dehydration include assisted drinking or oral rehydration therapy.

An overconsumption of water can lead to water intoxication, which can dangerously dilute the concentration of salts in the body. Overhydration sometimes occurs among athletes and outdoor laborers, but it can also be a sign of disease or damage to the hypothalamus. A persistent desire to drink inordinate quantities of water is a psychological condition termed polydipsia. It is often accompanied by polyuria and may itself be a symptom of Diabetes mellitus or Diabetes insipidus.[7]

A daily intake of water is required for the normal physiological functioning of the human body. The USDA recommends a daily intake of total water: not necessarily by drinking but by consumption of water contained in other beverages and foods. The recommended intake is 3.7 liters (appx. 1 gallon) per day for an adult male, and 2.7 liters (appx. 0.75 gallon) for an adult female.[8] Other sources, however, claim that a high intake of fresh drinking water, separate and distinct from other sources of moisture, is necessary for good health – eight servings per day of eight fluid ounces (1.8 liters, or 0.5 gallon) is the amount recommended by many nutritionists,[9] although there is no scientific evidence supporting this recommendation.[10][11]

The term “drinking” is often used metonymically for the consumption of alcoholic beverages. Most cultures throughout history have incorporated some number of the wide variety of "strong drinks" into their meals, celebrations, ceremonies, toasts and other occasions.[12] The earliest known evidence of fermented drinks in human culture dates to 8,000 BC.[13]

The drinking of alcohol has developed into a variety of well-established drinking cultures around the world. Despite its popularity, alcohol consumption poses significant health risks. Alcohol abuse and the addiction of alcoholism are common maladies worldwide. A high rate of consumption can also lead to cirrhosis, gastritis, gout, pancreatitis, hypertension, various forms of cancer, and numerous other illnesses.[14]

Quick links: Medicine Portal | Encyclopedia‏‎‏‎ | Gray's Anatomy‏‎ | Topics‏‎ |‏‎ Diseases‏‎ | Drugs | Wellness | Obesity‏‎ | Metabolic syndrome | Weight loss*
Disclaimer: The entire contents of WIKIMD.ORG are for informational purposes only and do not render medical advice or professional services. If you have a medical emergency, you should CALL 911 immediately! Given the nature of the wiki, the information provided may not be accurate, misleading and or incorrect. Use the information on this wiki at your own risk! See full Disclaimer.
Link to this page: <a href="http://www.wikimd.org/wiki/Drinking">Drinking</a>