== Information about Daunorubicin ==  Daunorubicin is an anthracycline antibiotic that has antineoplastic activity and is used in the therapy of acute leukemia and AIDS related Kaposi sarcoma. 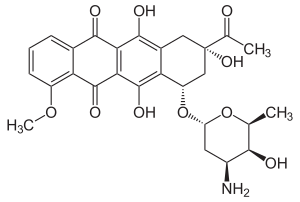 Daunorubicin is associated with a low rate of transient serum enzyme and bilirubin elevations during therapy, but has not been implicated in cases of clinically apparent acute liver injury with jaundice.

Mechanism of action of Daunorubicin

Daunorubicin (daw” noe roo’ bi sin) is a parenterally administered, cytotoxic antibiotic which is believed to act by intercalating between DNA base pairs and uncoiling the DNA helix, which results in inhibition of DNA synthesis and apoptosis of rapidly dividing cells.

Daunorubicin has potent activity in acute leukemia and was approved for this indication in the United States in 1979.  Current indications include induction of remission in acute lymphocytic and non-lymphocytic (myelogenous) leukemia both in children and adults.  Daunorubicin is available as a solution or a powder for injection in 20 and 50 mg vials [5 mg/mL] generically and under the brand name Cerubidine.  Daunorubicin is given intravenously, typically in a regimen of once daily for 3 days during induction and for two days of subsequent courses.  The dosage varies by indication, body surface area, patient age and renal and hepatic function.  A liposomal formulation of daunorubicin is available as a first line therapy for advanced HIV related Kaposi sarcoma.

Side effects of Daunorubicin

This WikiMD article Daunorubicin is a stub.
If you are a healthcare professional familiar with the topic Daunorubicin, or
A subject matter expert or authority on Daunorubicin, you can help us.
About | Mission | Paid editors welcome!