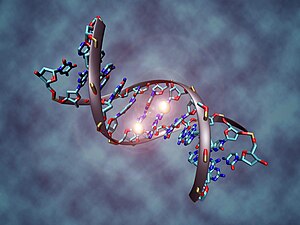 Illustration of a DNA molecule that is methylated at the two center cytosines. DNA methylation plays an important role for epigenetic gene regulation in development and disease

DNA methylation is the main way gene activity is adjusted during life, especially during early development.[1]

It is a process by which methyl groups are added to DNA. This suppresses gene transcription. Two of DNA's four nucleotides, cytosine and adenine, can be methylated. Since adenine methylation is restricted to prokaryotes, all eukaryote transcription is regulated by suppressing cytosine.

Suppressing genes is the basis of epigenetics, the study of changes in gene activity which are not caused by changes in the DNA sequence.[2] It is the study of gene expression, the way genes bring about their phenotypic effects.[3]

The changes in gene activity by methylation may last for the rest of the cell's life, and for many generations of cells through cell divisions. However, there is no change in the underlying DNA sequence of the organism. Instead, non-hereditary factors cause the organism's genes to behave (express themselves) differently.[1][4]

Quick links: Medicine Portal | Encyclopedia‏‎‏‎ | Gray's Anatomy‏‎ | Topics‏‎ |‏‎ Diseases‏‎ | Drugs | Wellness | Obesity‏‎ | Metabolic syndrome | Weight loss*
Disclaimer: The entire contents of WIKIMD.ORG are for informational purposes only and do not render medical advice or professional services. If you have a medical emergency, you should CALL 911 immediately! Given the nature of the wiki, the information provided may not be accurate, misleading and or incorrect. Use the information on this wiki at your own risk! See full Disclaimer.
Link to this page: <a href="http://www.wikimd.org/wiki/DNA_methylation">DNA methylation</a>