Onset of symptoms typically occurs at about age 60.

There are three major categories of CJD:  sporadic (the most common form, in which people do not have any known risk factors for the disease); hereditary (in which the person has a family member with the disease and tests positive for a genetic mutation associated with CJD), and acquired (in which the disease is transmitted by exposure to brain and nervous system tissue, usually through certain medical procedures).

A form called variant CJD can be acquired by eating meat from cattle affected by a disease similar to CJD, called bovine spongiform encephalopathy (commonly called “mad cow” disease). CJD cannot be transmitted through the air or through touching or most other forms of casual contact. 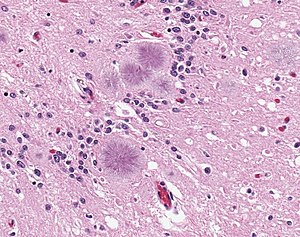 Initial symptoms of CJD include problems with muscle coordination, personality changes including progressive and impaired thinking and judgment, vision problems that may lead to blindness, and involuntary muscle jerks called myoclonus. People eventually lose the ability to move and speak, and enter a coma.

Tests that help in the diagnosis of CJD include electroencephalography (which records the brain's electrical pattern), detection of certain proteins in the fluid that surrounds the brain and spinal cord, and magnetic resonance imaging.

The only way to confirm a diagnosis of CJD is by brain biopsy or autopsy. A brain biopsy is discouraged unless it is need to rule out a treatable disorder.

CJD profiles of MRI and EEG from probable CJD patient

CJD belongs to a family of diseases known as prion diseases--derived from "protein" and "infectious."

There is no treatment that can cure or control CJD, although studies of a variety of drugs are now in progress. Current treatment is aimed at alleviating symptoms and making the person as comfortable as possible. Opiate drugs can help relieve pain, and the drugs clonazepam and sodium valproate may help relieve involuntary muscle jerks. Intravenous fluids and artificial feeding may be needed in later stages of the disease.

CJD is rapidly progressive. About 70 percent of individuals die within one year. In the early stages of disease, people may have failing memory, behavioral changes, lack of coordination and visual disturbances. As the illness progresses, mental deterioration becomes pronounced and people may develop involuntary movements, blindness, and weakness of extremities.  People eventually lose the ability to move and speak, and enter a coma.

Help WikiMD:Join WikiMD as an an editor and help improve the page Creutzfeldt-Jakob disease or others.

Quick links: Medicine Portal | Encyclopedia‏‎‏‎ | Gray's Anatomy‏‎ | Topics‏‎ |‏‎ Diseases‏‎ | Drugs | Wellness | Obesity‏‎ | Metabolic syndrome | Weight loss*
Disclaimer: The entire contents of WIKIMD.ORG are for informational purposes only and do not render medical advice or professional services. If you have a medical emergency, you should CALL 911 immediately! Given the nature of the wiki, the information provided may not be accurate, misleading and or incorrect. Use the information on this wiki at your own risk! See full Disclaimer.
Link to this page: <a href="http://www.wikimd.org/wiki/Creutzfeldt-Jakob_disease">Creutzfeldt-Jakob disease</a>