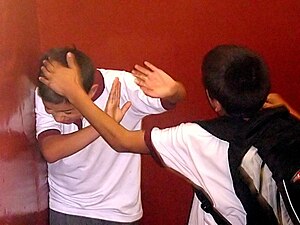 Bullying is unwanted aggressive behavior by another person or group of people. In bullying, there is always an actual or perceived power imbalance, and the aggression is repeated multiple times or is highly likely to be repeated. Bullying also includes cyberbullying, a type of aggression that is carried out through electronic means, such as through the Internet, e-mail, or mobile devices. People of all ages can be bullied, and bullying may take place at home, school, or work. Because of cyberbullying, bullying can occur almost anywhere at any time.

Bullying is when a person or a group shows unwanted aggression toward another person. To be considered bullying, the behavior in question must be aggressive.2 The behavior must also involve an imbalance of power (e.g., physical strength, popularity, access to embarrassing details about a person) and be repetitive, meaning that it happens more than once or is highly likely to be repeated.

Who is affected and how many are at risk for bullying?

People of all ages can be bullied. Bullying may take place at home, school, or work.

What are common signs of being bullied?

Signs of bullying include:

How does bullying affect health and well-being?

Bullying can affect physical and emotional health, both in the short term and later in life. It can lead to physical injury, social problems, emotional problems, and even death.1 Those who are bullied are at increased risk for mental health problems, headaches, and problems adjusting to school. Bullying also can cause long-term damage to self-esteem.

Children and adolescents who are bullies are at increased risk for substance use, academic problems, and violence to others later in life.

NICHD-funded research studies also found that unlike traditional forms of bullying, youth who are bullied electronically—such as by computer or cell phone—are at higher risk for depression than the youth who bully them.5 Even more surprising, the same studies found that cyber victims were at higher risk for depression than were cyberbullies or bully-victims (i.e., those who both bully others and are bullied themselves), which was not found in any other form of bullying.

What are risk factors for being bullied?

Those who are at risk of being bullied may have one or more risk factors:

What can be done to help someone who is being bullied?

To help someone who is being bullied, support the person and address the bullying behavior. Other ways to help—including what to do if a person is in immediate danger—are listed below.

Support a child who is being bullied:

The "Bullying: Be More Than a Bystander" resource, which includes a presentation and facilitator's guide, seeks to educate people about taking action against bullying. It suggests you can help someone who is being bullied in the following ways:

If you feel that you have taken all possible steps to prevent bullying and nothing has worked, or someone is in immediate danger, there are other ways for you to help.

Coronavirus: WHO declares COVID 19 a pandemic.

Quick links: Medicine Portal | Encyclopedia‏‎‏‎ | Gray's Anatomy‏‎ | Topics‏‎ |‏‎ Diseases‏‎ | Drugs | Wellness | Obesity‏‎ | Metabolic syndrome | Weight loss*
Disclaimer: The entire contents of WIKIMD.ORG are for informational purposes only and do not render medical advice or professional services. If you have a medical emergency, you should CALL 911 immediately! Given the nature of the wiki, the information provided may not be accurate, misleading and or incorrect. Use the information on this wiki at your own risk! See full Disclaimer.
Link to this page: <a href="http://www.wikimd.org/wiki/Bullying">Bullying</a>