A cyanotic newborn, or "blue baby"

Blue baby syndrome (or simply, blue baby also can be called methemoglobinemia) occurs when newborn babies have cyanotic heart defects, such as: 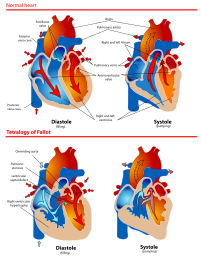 The most common cause of blue baby syndrome, and the one which was the subject of the classic "blue baby operation" developed at Johns Hopkins in the 1940s, is Tetralogy of Fallot. In the normal heart, there are four separate chambers; the two top chambers, or atria, pump blood simultaneously into the two bottom chambers, or ventricles. Blood first enters the heart at the right atrium, which then empties blood into the right ventricle, which pumps the blood into the lungs through the pulmonary artery to get oxygen. From the lungs, the blood enters the left atrium through the pulmonary vein; the left atrium empties into the left ventricle, which pumps the blood into the aorta and from there reaches the rest of the body. Because the left ventricle is responsible for getting blood to the entire body through the aorta, it is usually the biggest and strongest chamber of the heart.

The following is a depiction of normal blood flow through the body. Valves keep the blood from flowing backwards. Capital letters indicate oxygenated blood:

The blue baby syndrome known as Tetralogy of Fallot consists of an incomplete wall between the ventricles (known as a ventricular septal defect or VSD); an aorta that sits over this defect so that its blood comes from both ventricles instead of just from the left (overriding aorta); a defective right ventricular outflow tract near the pulmonary valve that prevents full flow of blood to the lungs; and a muscular right ventricle necessary to accomplish the extra work required to overcome that defect (right ventricular hypertrophy).

The following is a depiction of blood flow in Tetralogy of Fallot. Mixed capital letters indicate partially oxygenated blood.

Unoxygenated blood from the right ventricle flows into the aorta preferentially because of the obstructed outflow tract into the lungs. This means less blood has the opportunity to be oxygenated in the lungs. Blood mixes abnormally between the left and right ventricles and into the aorta. Oxygen gives blood its reddish color; cyanosis describes the "blueness" in the baby which results from the pumping of mixed oxygenated and unoxygenated blood throughout the body.

A sort of "blue baby syndrome" can also be caused by Methemoglobinemia.[2][3] It is believed to be caused by high nitrate contamination in ground water resulting in decreased oxygen carrying capacity of haemoglobin in babies leading to death. The groundwater is thought to be contaminated by leaching of nitrate generated from fertilizer used in agricultural lands and waste dumps.[4] It may also be related to some pesticides (DDT, PCBs etc.), which cause ecotoxicological problems in the food chains of living organisms, increasing BOD, which kills aquatic animals.

Other insults in neonates, such as respiratory distress syndrome, can also produce a "blue baby syndrome," although like methemoglobinemia, these are not structural lesions and are not regarded by most doctors as true "cyanotic lesions."

On November 29, 1944, the first successful Tetrology of Fallot operation was performed at the Johns Hopkins Hospital. In 1943, the syndrome was brought to the attention of surgeon Alfred Blalock and Helen Taussig. Helen Taussig was trying to figure out a way to treat the hundreds children patients who had the Blue Baby Syndrome. However, Vivien Thomas, who was Alfred Blalock's surgical technician adapted a surgical procedure in which he had earlier developed for another purpose, involving the anastomosis, or joining, of the subclavian artery to the pulmonary artery, which allowed the blood another chance to become oxygenated.The procedure became known and demonstrated worldwide. Although at first Alfred Blalock gained credit for Vivien Thomas's major work, Vivien Thomas was later on recognised as the developer of the procedure used to treat Blue Baby Syndrome. In 1976, Johns Hopkins University presented Thomas with an honorary doctorate.[37]

Quick links: Medicine Portal | Encyclopedia‏‎‏‎ | Gray's Anatomy‏‎ | Topics‏‎ |‏‎ Diseases‏‎ | Drugs | Wellness | Obesity‏‎ | Metabolic syndrome | Weight loss*
Disclaimer: The entire contents of WIKIMD.ORG are for informational purposes only and do not render medical advice or professional services. If you have a medical emergency, you should CALL 911 immediately! Given the nature of the wiki, the information provided may not be accurate, misleading and or incorrect. Use the information on this wiki at your own risk! See full Disclaimer.
Link to this page: <a href="http://www.wikimd.org/wiki/Blue_baby_syndrome">Blue baby syndrome</a>