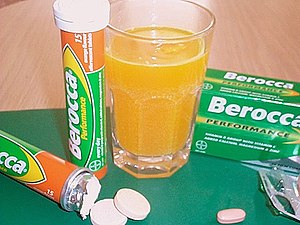 Berocca is a brand of effervescent drink and vitamin tablets containing B group vitamins and vitamin C. Berocca is available in a number of countries worldwide.

Berocca was originally manufactured by Roche Pharmaceuticals, but is now manufactured by Bayer after Bayer's global acquisition of Roche Consumer Health in January 2005.

Berocca Performance is a formulation of B group vitamins, vitamin C plus added magnesium, calcium and zinc. It comes in three flavours, Orange, Mixed Berries and Tropical.

Recommended daily dose: From age 12 to adult - one tablet daily.

Berocca causes urine to turn deep yellow in colour - this is due to the excess vitamin B2 being passed via urine.

Berocca ran a series of television commercials in Australia and New Zealand throughout the 1980s and 1990s, using the slogan "B-B-B-Berocca gives you back your B-B-Bounce".

A recent marketing campaign in Australia for Berocca Performance with the slogan "Release the inner geek" targets high school students studying for exams.

In South Africa a "Beready Besharp Berocca" campaign was launched.

Long-running Outdoor (poster) campaigns in the United Kingdom with the slogan "Stay sharp".

In 2008 a television advert was launched featuring people dancing using treadmills similar to OK Go's music video for the 2006 song "Here It Goes Again". The music is "Living on the Ceiling" by the British synthpop band Blancmange, taken from their 1982 album Happy Families.

More recently, as of September 2010, a new advertising campaign featuring lumberjacks dancing on water has been launched, with the slogan "You, but on a really good day."

Berocca also advertised to bloggers in the United Kingdom.[3]

In March 2011 the Health Department of Australia moved to withdraw the advertising of Berocca for its unsubstantiated claims of providing invigoration. This came in the wake of the same department issuing Berocca with a Healthcare product award in November of the year before.[4]