Infants with AS appear normal at birth but often have feeding problems in the first months of life and exhibit noticeable developmental delays by 6-12 months.

Seizures often begin between 2-3 years of age and occur in 80-85 percent of those with AS.  Features that help define the syndrome include very happy demeanor with frequent laughter, poor balance, tremor, and minimal to no speech. 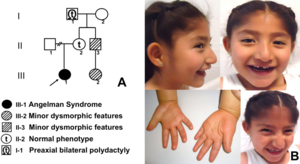 The disorder results from the absence of the UBE3A gene inherited from the mother.  The gene provides instructions for a protein that plays a critical role in the normal development and function of the nervous system.

Fair. Most individuals with Angelman syndrome will have significant developmental delays, speech limitations, and motor difficulties, but they understand much of what is said and often learn to communicate non-verbally and by using communication devices.  T

Quick links: Medicine Portal | Encyclopedia‏‎‏‎ | Gray's Anatomy‏‎ | Topics‏‎ |‏‎ Diseases‏‎ | Drugs | Wellness | Obesity‏‎ | Metabolic syndrome | Weight loss*
Disclaimer: The entire contents of WIKIMD.ORG are for informational purposes only and do not render medical advice or professional services. If you have a medical emergency, you should CALL 911 immediately! Given the nature of the wiki, the information provided may not be accurate, misleading and or incorrect. Use the information on this wiki at your own risk! See full Disclaimer.
Link to this page: <a href="http://www.wikimd.org/wiki/Angelman_syndrome">Angelman syndrome</a>