Air pollution is a broad term applied to any chemical, physical (e.g. particulate matter), or biological agent that modifies the natural characteristics of the atmosphere. The atmosphere is a complex, dynamic natural system that is essential to support life on planet earth. Stratospheric ozone depletion due to air pollution has long been recognized as a threat to human health as well as to the earth's ecosystems. 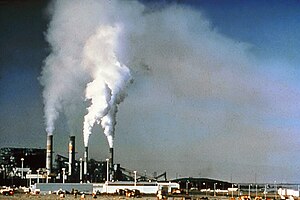 Worldwide air pollution is responsible for large numbers of deaths and cases of respiratory disease. Setting of air quality standards, such as the U.S. Clean Air Act, has begun to improve air quality for some pollutants. While major stationary sources are often identified with air pollution, the greatest source of emissions are actually mobile sources, principally the automobile. There are many available air pollution control technologies and urban planning strategies available to reduce air pollution; however, worldwide costs of addressing this issue are high. The most immediately available method of improving air quality is adoption of greater use of bioethanol fuel, biodiesel, solar energy and increased reliance upon hybrid vehicle technology.

It is estimated that three million people indirectly die of respiratory and cardiovascular disease worldwide, many of which cases are linked to air quality and smog.[1] Many of these mortalities are largely attributable to indoor air pollution.[2] Worldwide more deaths per year are linked to air pollution than the number deaths caused by automobile accidents.[3] Research published in 2005 suggests that 310,000 Europeans die from air pollution annually. Direct causes of air pollution related deaths include aggravated asthma, bronchitis, emphysema, lung and heart diseases, and other respiratory allergies. The US EPA estimates that a proposed set of changes in diesel engine technology (Tier 2) could result in 12,000 fewer premature mortalities, 15,000 fewer heart attacks, 6000 fewer emergency room visits by children with asthma, and 8900 fewer respiratory-related hospital admissions each year in the United States.

The worst short term civilian event from pollution in India was the 1984 Bhopal Disaster. Leaked industrial vapors killed more than 2,000 people outright and injured anywhere from 150,000 to 600,000 others, some 6,000 of whom would later die from their injuries. The United Kingdom suffered its worst air pollution event when the December 4th Great Smog of 1952 formed over London. In six days more than 4,000 died, and 8000 more died within the following months. An accidental leak of anthrax spores from a biological warfare laboratory in the former USSR in 1979 near Sverdlovsk is believed to have been the cause of hundreds of civilian deaths. The worst single incident of air pollution to occur in the United States of America occurred in Donora, Pennsylvania in late October, 1948, when 20 people died and over 7,000 were injured. [1]

In Canada, air quality standards are typically determined by a federal-provincial process known as the Canadian Council of Ministers for the Environment (CCME). CCME created the Canada-Wide Standards for ozone and fine particulate matter (PM 2.5). National Ambiant Air Quality Objectives also exist for criteria air contaminants, although these are used less frequently than the CCME standards.

The year 2000 UK Air Quality Regulations were amended in 2002, and there has been British harmonization with EU regulations.

In the 1960s and 70s, the United States Congress enacted a series of Clean Air Acts which significantly strengthened regulation of air pollution. Individual U.S. states, some European nations and eventually the European Union followed these initiatives. The Clean Air Act sets numerical limits on the concentrations of a basic group of air pollutants and provides reporting and enforcement mechanisms.

The basic technology for analyzing air pollution is through the use of a variety of mathematical models for predicting the transport of air pollutants in the lower atmosphere. The principal methodologies are:

The point source problem is the best understood, since it involves simpler mathematics and has been studied for a long period of time, dating back to about the year 1900. It uses a Gaussian dispersion model to forecast the air pollution isopleths, with consideration given to wind velocity, stack height, emission rate, stability class (a measure of atmospheric turbulence).[2][3] This model has been extensively validated and calibrated with experimental data for all sorts of atmospheric conditions.

The roadway air dispersion model was developed starting in the late 1960s and early 1970s in response to requirements of the National Environmental Policy Act and the U.S. Department of Transportation (then known as the Federal Highway Administration) to understand impacts of proposed new highways upon air quality, especially in urban areas. Several research groups were active in this model development, among which were: the Environmental Research and Technology (ERT) group in Lexington, Massachusetts, the ESL Inc. group in Sunnyvale, California and the California Air Resources Board group in Sacramento, California. The research of the ESL group received a boost with an contract award from the U.S. Environmental Protection Agency to validate a line source model using sulfur hexaflouride as a tracer gas. This program was successful in validating the line source model developed by ESL inc. Some of the earliest uses of the model were in court cases involving highway air pollution, the Arlington, Virginia portion of Interstate 66 and the New Jersey Turnpike widening project through East Brunswick, New Jersey.

Area source models were developed in 1971 through 1974 by the mid 1970s by the ERT and ESL groups, but addressed a smaller fraction of total air pollution emissions, so that their use and need was not as widespread as the line source model, which enjoyed hundreds of different applications as early as the 1970s. Similarly photochemical models were developed primarily in the 1960s and 1970s, but their use was more specialized and for regional needs, such as understanding smog formation in the Livermore Valley, California.

The lack of ventilation indoors concentrates air pollution where people have greatest exposure times. Radon (Rn) gas, a carcinogen, is exuded from the Earth in certain locations and trapped inside houses. Researchers have found that radon gas is responsible for over 1,800 deaths annually in the United Kingdom.[citation needed] Building materials including carpeting and plywood emit formaldehyde (H2CO) gas. Paint and solvents give off volatile organic compounds (VOCs) as they dry. Lead paint can degenerate into dust and be inhaled. Intentional air pollution is introduced with the use of air fresheners, incense, and other scented items. Controlled wood fires in stoves and fireplaces can add significant amounts of smoke particulates into the air, inside and out. Indoor air pollution may arise from such mundane sources as shower water mist containing arsenic or manganese, both of which are damaging to inhale. The arsenic (As3+) can be trapped with a shower nozzle filter.

Indoor pollution fatalities may be caused by using pesticides and other chemical sprays indoors without proper ventilation, and many homes have been destroyed by accidental pesticide explosions.[citation needed]

Second-hand tobacco smoke is now recognized as an indoor air pollutant which accounts for an estimated 3,000 lung cancer deaths annually in the US.[citation needed] Carbon monoxide (CO) poisoning is a quick and silent killer, often caused by faulty vents and chimneys, or by the burning of charcoal indoors. 56,000 Americans died from CO in the period 1979-1988.[citation needed] Chronic carbon monoxide poisoning can result even from poorly adjusted pilot lights. Smoke inhalation is a common cause of death in victims of house fires. Traps are built into all domestic plumbing to keep deadly sewer gas, hydrogen sulfide, out of interiors. Clothing emits tetrachloroethylene, or other dry cleaning fluids, for days after dry cleaning.

Though its use has now been banned in many countries, the extensive use of asbestos in industrial and domestic environments in the past has left a potentially very dangerous material in many localities. Asbestosis is a chronic inflammatory medical condition affecting the tissue of the lungs. It occurs after long-term, heavy exposure to asbestos, e.g. in mining or in the installation or removal of asbestos-containing materials from structures. Sufferers have severe dyspnea (shortness of breath) and are at an increased risk regarding several different types of lung cancer. As clear explanations are not always stressed in non-technical literature, care should be taken to distinguish between several forms of relevant diseases. According to the World Health Organisation (WHO), these may defined as; asbestosis, lung cancer, and mesothelioma (generally a very rare form of cancer, when more widespread it is almost always associated with prolonged exposure to asbestos).

The following items are commonly used as pollution control devices by industry or transportation devices. They can either destroy contaminants or remove them from an exhaust stream before it is emitted to the atmosphere.

The greenhouse effect is a phenomenon whereby increased carbon dioxide emissions create a condition in the upper atmosphere, causing a trapping of excess heat and leading to increased surface temperatures. This effect has been understood by scientists for nearly two centuries, and more data is being accumulated to quantify this phenomenon. The advancement of technology has contributed to a lengthening and deepening body of data. Some scientists note the association between carbon dioxide emissions and global warming. A number of studies have investigated the potential for long-term rising levels of atmospheric carbon dioxide to cause slight but critical increases in the acidity of ocean waters and the possible effects of this on marine ecosystems.

all UK pollution measurements, and emission estimates, as well as much general information on air pollution.

Quick links: Medicine Portal | Encyclopedia‏‎‏‎ | Gray's Anatomy‏‎ | Topics‏‎ |‏‎ Diseases‏‎ | Drugs | Wellness | Obesity‏‎ | Metabolic syndrome | Weight loss*
Disclaimer: The entire contents of WIKIMD.ORG are for informational purposes only and do not render medical advice or professional services. If you have a medical emergency, you should CALL 911 immediately! Given the nature of the wiki, the information provided may not be accurate, misleading and or incorrect. Use the information on this wiki at your own risk! See full Disclaimer.
Link to this page: <a href="http://www.wikimd.org/wiki/Air_Pollution">Air Pollution</a>