Popularly known as Humira, Adalimumab is a monoclonal antibody and immunosuppressant used in auto-immune diseases such as Crohn's disease; and Rheumatoid arthritis 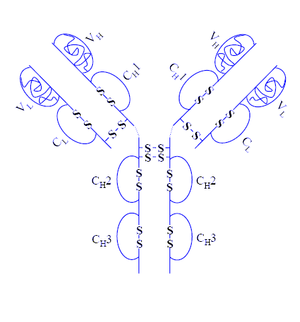 Adalimumab is a monoclonal antibody to human tumor necrosis factor (TNF) alpha which has potent antiinflammatory activity and is used in the therapy of severe rheumatoid arthritis and inflammatory bowel disease. 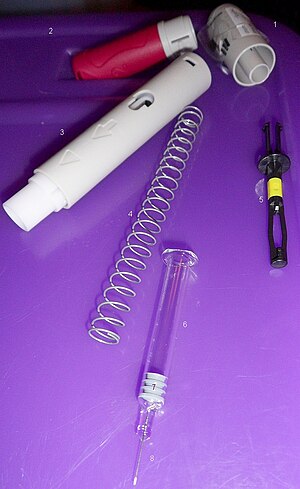 Components of an Adalimumab-Humira pen

Mechanism of action of Adalimumab

Adalimumab (ay" da lim' ue mab) is a human recombinant monoclonal immunoglobulin G1 antibody to TNF alpha which binds avidly to serum and tissue-bound TNF, causing its inactivation and degradation. Inhibition of TNF alpha activity leads to modulation of the inflammatory and pain pathways activated by this cytokine.

Adalimumab was approved in the United States for use in rheumatoid arthritis in 2002, and subsequently its indications have been extended to ankylosing spondylitis, juvenile idiopathic (rheumatoid) arthritis, severe psoriasis and psoriatic arthritis, Crohn disease and ulcerative colitis. Adalimumab is considered a disease modifying antirheumatic drug (DMARD), and has been shown to improve symptoms as well as joint and cartilage damage in the inflammatory arthritides.

Dosage and administration for Adalimumab

Adalimumab is available in prefilled syringes or pens as 40 mg/0.8 mL under the brand name of Humira. The typical maintenance dose of adalimumab in adults is 40 mg subcutaneously every other week.

Side effects of Adalimumab

Adalimumab has been associated with a low rate of serum aminotransferase elevations during therapy, but these have been transient, mild and asymptomatic, and have rarely required dose modification. ALT levels above 3 times ULN have been reported in 1 to 3.5% of adalimumab recipients compared to 0.9 to 1.8% of controls. Rare instances of clinically apparent liver injury have been reported with adalimumab, resembling the hepatic injury that has been described with infliximab therapy. In at least one instance, liver injury arising during adalimumab therapy did not recur on switching to etanercept. The onset of injury was within 3 months and the pattern of serum enzyme elevations was hepatocellular. The injury promptly resolved on stopping adalimumab.

Reactivation of Hepatitis B

Like infliximab, adalimumab has been linked to cases of reactivation of hepatitis B. Reactivation typically occurs in patients who are inactive HBsAg carriers, with normal serum aminotransferase levels and no or only low levels of HBV DNA in serum. The immune suppression caused by the immunomodulatory agent leads to an increase in HBV replication and rise in serum HBV DNA levels. With stopping the immunosuppression (or between cycles of therapy), restoration of immune function leads to an acute immunological response to the heightened viral replication and an flare of hepatitis, that can be severe and can result in hepatic failure and death. Reactivation in patients with anti-HBc without HBsAg (serologic pattern of previous HBV infection) has only rarely been reported in patients treated with anti-TNF antagonists, and is more common after therapy with rituximab or bone marrow transplantation. The anti-TNF inhibitors have little or no effect on hepatitis C virus levels and have been used safely in patients with chronic hepatitis C.

Other Drugs in the Subclass

Join WikiMD as a freelancer or paid editor and help improve the page Adalimumab or others.
Other languages:
English
Retrieved from "http://www.wikimd.org/wiki/index.php?title=Adalimumab&oldid=2240388"
Categories: